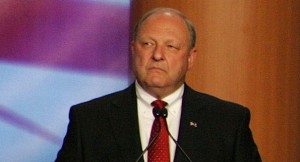 Jack Kimball: Another loss for the tea party

A tea party-backed chairman of the New Hampshire Republican Party — under fire for lackluster fundraising, election losses and inexperience on the job — resigned just minutes before fed-up GOP leaders could remove him.

Jack Kimball — who became chairman just seven months ago as part of the much-heralded “tea party revolution” in New Hampshire — stepped down, telling supporters “I am not going to become an obstacle for this party.”

His forced resignation is widely viewed as another sign of the tea party’s declining fortunes and a move by Republican leaders who are trying to take back control of the party from the tea party.

Under Kimball’s control, the New Hampshire Republican party lost the confidence of the state’s congressional delegation and the Republican National Committee.  Even a last minute effort by tea party activists could not save him.

But that didn’t stop the faux grassroots group from invading the Holiday Inn in Concord, New Hampshire with typical bluster, shouting epithets from the floor, waving signs and demanding that Kimball keep his job.

But longtime Republican Sal Rivero of Concord saw it different. In an email to Capitol Hill Blue, Rivero called Kimball’s ouster as “something that is long overdue.”

“If the Republican Party wants to reclaim its former glory, it has to kick out these tea party nuts and get back to issues,” he said.

RNC Chairman Reince Priebus issued a statement congratulating Kimball’s successor, former state vice chairman, Wayne MacDonald, saying “we have a strong partner in Wayne, and with his leadership we will make certain Barack Obama is a one-term president.”