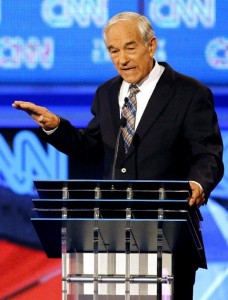 Dying because you lack health insurance is apparently a laughing matter to some — especially tea party members and supporters.

Which may explain why so many in the audience laughed, cheered and shouted out “yeah” when Republican/Libertarian Presidential candidate Ron Paul was asked during Monday’s tea party Presidential debate that if a healthy, 30-year-old man without health insurance suddenly went into a coma and needed intensive and expensive treatment, should “society should just let him die?”

To his credit, Paul disagreed with the bloodthirsty and insensitive crowd, saying that there are alternatives to government-funded health care and noting that when churches took care of medical costs “we never turned anybody away from the hospital.”

But Paul’s compassion was buried beneath an avalanche of audience crassness that has come to exemplify politics and so-called grassroots movements like the tea party.

Even Texas Gov. Rick Perry seemed to think the bloodlust in the debate crowd was unnerving.

“I was a bit taken aback by that myself,” Perry told NBC News. “We are the party of life. We ought to be coming up with ways to save lives.”

Ironically, during Ron Paul’s 2008 Presidential run, his 49-year-old campaign manager, Kent Snyder, died of pneumonia and left his family with more than $400,000 in medical bills because he did not have health insurance.