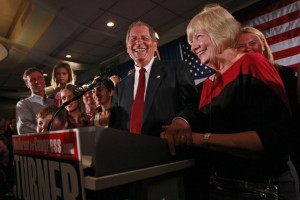 Bob Turner, center, joined by his wife Peggy, right, and family smiles as he delivers his victory speech during an election night party, Wednesday, Sept. 14, 2011 in New York. Turner says his shocking win in a heavily Democratic New York City district is a "loud and clear" message to Washington. (AP Photo/Mary Altaffer)

Voters in special elections Tuesday sent a loud, clear and harsh message to President Barack Obama and the Democratic Party.

The party of the jackass lost a normally safe seat in New York and suffered a humiliating blowout in Nevada.

“The base stayed home or those who showed up voted the other way,” a disheartened Democratic strategist told Capitol Hill Blue.  He characterized the Democratic base as “betrayed, disappointed, furious and disgusted” with Obama and the party.

Going into the special election Tuesday morning, even House Democratic Whip Steny Hoyer admitted to reporters that blame for losses in the two special elections would land in Obama’s lap.

In New York, Republican Bob Turner beat Democrat David Weprin in a race for the seat vacated by scandal-ridden Anthony Weiner.   In Nevada, it wasn’t even close as Democrat Kate Marshall went down in flames against Republican Mark Amodei in a race for a rural seat near Reno.

The New York loss stung Democrats the most. The party holds a 3-1 advantage in registration and have held the seat for nearly a century.

“A bad night, to be sure,” said a demoralized Democrat.