Will Chris Christie run? Can he save the GOP? 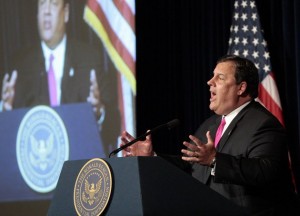 In a political season of come-and-go GOP Presidential frontrunners, New Jersey Gov. Chris Christie is the “next big thing,” but only if he decides to run and he keeps saying he has no intention of running,

Maybe so, maybe not. Christie said the other day: “What do I have to do? Commit suicide to convince you that I’m not going to run?”

He later ruled out suicide and seems to be softening some of his “no way” responses to whether or not he will jump into the Republican scramble for the right to oppose Barack Obama in 2012.

GOP insiders clearly want him in the race.

“He’s the man on the white horse that the GOP is looking for,” says retired political consultant John Manning. “He arguably has the best shot against Obama.”

Other political pros tell Capitol Hill Blue that Christie is clearly the man of the moment but warn that the moment can be fleeting if he continues to play coy.

Christie is a blunt, no-nonsense leader at a time when the nation is looking for such a President. He’s not as scary as a Rick Perry and polls show he would have more of the mainstream appeal with independents that control American Presidential elections.

If he sticks to his guns about not running, it may be his one and only shot.