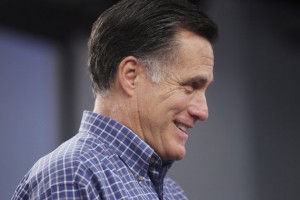 Republican voters, showing little enthusiasm for the current crop of candidates for President, are slowly embracing former Massachusetts governor Mitt Romney not because they have any enthusiasm for him but because he seems — at the moment — to be the best chance the party has to beat Barack Obama in 2012

It’s the old political game of the “lesser of all evils” for frustrated Republicans who wonder where the all the good candidates have gone — assuming the party has any good candidates to offer up against an unpopular President who should be easy to beat.

“I don’t really care for Romney but I’ll probably vote for him because I really don’t have any other choices,” Thomas Hardwell of Spartanburg, SC, told Capitol Hill Blue this week. “We have to beat Obama and if that means holding my nose and voting for Mitt Romney, then that’s what I’ll do.”

Republicans from around the country say pretty much the same thing.

“I’d vote in a heartbeat for (New Jersey governor) Chris Christie but it doesn’t look like he going to run,” says Sheryl Winston of Kansas City. “So I guess it’s Romney>”

Most Republicans interviewed by Capitol Hill Blue agreed that tea party candidates like Rick Perry and Michele Bachmann are too extreme to win a national election where independents can make the difference.

“If we want to get anything done after next year’s election, then we probably have to go with Romney,” said Alexis Wilson of Denver.  “I don’t like it but I can live with it if it means putting a Republican in the White House.”

Romney knows he not the candidate who inspires deep passion in GOP circles but he is counting on voter pragmatism within GOP ranks.

“I’m the guy at the time that’s needed. And if you guys agree, terrific. If you don’t, that’s your right, too,'” Romney said in a recent speech. “We need to come together to win.”

“He’s not the best candidate,” says Homer Cantrell of Chicago, “but at the moment he’s the best we’ve got.”