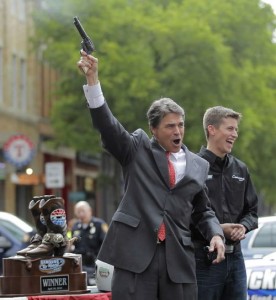 Perry says his father changed the name of the camp in West Texas after he purchased it but legislators and other invited guests said the name still appeared on a large rock at the camp’s entrance when Perry hosted guests at the camp early in his political career.

The controversy raises new questions about racism that has haunted Perry in the past and could drive another nail in the coffin of his rapidly-failing bid to win the GOP nomination for President.

Perry now claims the camp’s name was “an offensive name that has no place in the modern world.”

But the name had a place in Perry’s world for many years of his life, both as a private citizen and later as a state official and governor.  Locals who live around Paint Creek, Texas, still call the camp by that name.

Perry often brags that his upbringing in West Texas defined his philosophy and his conservatism.

And he grew up in a segregated area of Texas were African-Americans were treated as second-class citizens.