Obama admits America is worse off under his presidency 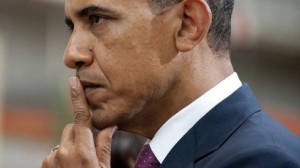 President Barack Obama admitted Monday that the America he sought to lead four years ago is not better off now than it was then but — as is his style — stopped short of accepting the blame for the nation’s woes.

Said Obama in an interview with ABC’s George Stephanopoulos:

They’re not better off then they were before Lehman’s collapse, before the financial crisis, before this extraordinary recession that we’re going through.  I think that what we’ve seen is that we’ve been able to make steady progress to stabilize the economy, but the unemployment rate is still way too high.

Obama also conceded that he goes into his 2012 re-election bid as an underdog, saying “I’m used to being the underdog. But at the end of the day, people are going to ask ‘who’s got a vision?'”

A new Washington Post-ABC News Poll confirms that Obama faces problems with his re-election bid. Among those surveyed, 55 percent said Obama will be a one-term president while only 35 percent say he will win re-election.