Is a ‘Cain Mutiny’ underway in the GOP? 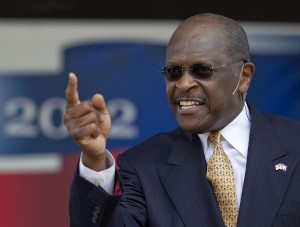 Herman Cain: The new 'Godfather' of the GOP?

Herman Cain is the latest “big thing” for a frustrated Republican Party searching frantically for a contender — any contender — to unseat President Barack Obama.

Meanwhile, former flavor of the month Rick Perry is plummeting in the polls.

Romney has 17 percent — up one percent from two weeks ago — while Cain jumped 12 points for a tie for first. Perry fell 11 percentage points — to 12 percent — for third while former Speaker of the House Next Gingrich moved up one point for fourth and Libertarian/populist Ron Paul dropped two points and fell from fourth to fifth.

Those surveyed cited Perry’s disappointing debate performances as one of the reasons he has dropped so dramatically in the polls.

But GOP voters remain far from settled in their choice.  Three out of four of those surveyed said its too early for make up their minds and only 19 percent said they have made up their minds.