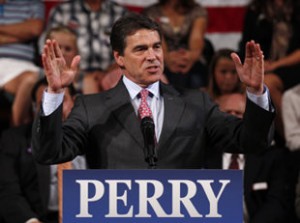 With the GOP running out of saviors and Herman Cain’s fortunes rising, former Presidential front runner Rick Perry is doing something he’s never had to do before in his political career — actually work hard to prepare for a debate that can either rescue his flagging campaign or drive the final nail into its coffin.

Most political experts tell Capitol Hill Blue that Perry faces a do-or-die test tonight.  He’s dropped to third in most polls and his numbers continue to dwindle after dismal debate performances and increased questions about his racism, cronyism and jobs claims that don’t jive with the facts.

Perry curtailed his campaign schedule recently so he could cram for the debate and work on his message.  Later in the week he plans to deliver what aides call a “significant” economic speech with an emphasis on jobs and the economy.

“He’s suddenly realized that just making claims about jobs in Texas isn’t enough,” says one GOP consultant.  “He needs to focus and hone his message.

Perry, who is used to just winging it from the podium, is practicing his debate style in rehearsal sessions against stand-ins for Mitt Romney.

Tonight could well tell the story.