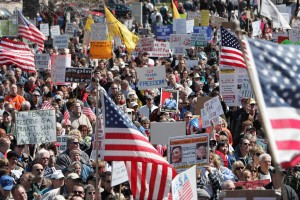 Displaying the kind of political hypocrisy that drives political hyperbole, the tea party is trying to discredit the growing and widespread anti-corporate protest movement as a sham grassroots operation driven by unions and other special interest groups.

In a case of the pot calling the kettle black, the tea party — itself bankrolled by the energy Koch Industries energy conglomerate — is sending in infiltrators to try and identify paid union activists.

Videos claiming “debauchery” and “terrorism” now appear on tea-party affiliated web sites.  One video claims to show a anti-wall street protestor defecating on a police car but sources close to the tea party movement say the action was staged and the perpetrator was actually part of the tea party group’s video crew.

“It was street theater,” a tea party member bragged to Capitol Hill Blue.

The tea party actions are part of an organized effort within the faux grassroots movement to regain lost momentum as tea-party back candidates struggle in the GOP Presidential primary circus and polls show support fading for the movement.

“Like Sarah Palin, the tea party is trying to hold on to past glory,” says GOP political operative Seth Davidson. “Their time has passed.”

Recent polls show about one in four of Americans now hold a favorable view of the tea party as a political movement while more than 70 percent of Americans feel tea party-backed members of Congress are to blame for much of the country’s financial woes and the government’s inability to deal with economic problems.