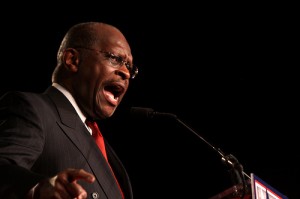 Herman Cain: Who, me?

GOP Presidential contender Herman Cain has a long and sordid history of sexually-harassing women — a record that began well before his tenure as president of the National Restaurant Association and one that continued long after he left.

Cain, under fire after Politico uncovered sexual harassment complaints against Cain, backtracked Monday and admitted that he “recalled” at least one financial settlement with a female employee of the restaurant association during his tenure as president in the 1990s.  Legal records show at least two such settlements while Cain served as president of the trade association.

“He was always making suggestive comments or brushing up against women,” says the former employee, who asked not to be identified.  “He’s a dirty old man.”

Capitol Hill Blue has also talked with former former employees of Godfathers Pizza, Cain’s food chain where he served as CEO, who said he “came on to women all the time.”

“You did not want to be alone in a room with him,” says one former female employee.

Faced with the accusations, Cain has shifted from stonewalling to denial to admission.  On Sunday, he refused to answer a question from a reporter on whether or not he had ever been charged with sexual harassment by firing back: “Have you ever been charged with sexual harassment?”  Then he said he didn’t “remember” any settlement with female employees.

Then the story shifted again.  On PBS Monday, Cain said:

I was aware that an agreement was reached. The word ‘settlement’ versus the word ‘agreement’ you know, I’m not sure what they called it. I know that there was some sort of agreement, but because it ended up being minimal, they didn’t have to bring it to me. My general counsel and the head of human resources had the authority to resolve this thing.

Later, on Fox News, he claimed the “agreement” was part of a “termination” of an employee of the group.

Settlement, agreement or whatever, Cain’s behavior around women has long been questionable but the businessman has had the resources and legal talent around him to keep his actions quiet.

A number of female employees left Godfathers Pizza with large “severance packages” after they signed non-disclosure agreements to not discuss his behavior and female employees have come and gone from the Cain campaign after encounters with the candidate.