Herman Cain is a damn liar 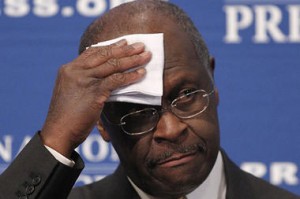 Herman Cain is a liar.

He is a damn liar.

He’s a liar. He’s also an abuser of women. He doesn’t belong in the White House. He belongs in prison where predators like him are given a whole new education in sexual abuse.

So far, three former employees of the National Restaurant Association have confirmed Cain is a sexual predator who harasses female subordinates.

“Everybody knew about it,” says Chris Wilson, a Republican pollster who worked for the restaurant association at the time.

“The word around town was to never be alone with Cain,” says Sherry Winston, who worked for another trade association at the time and who had friends at the restaurant group. “At one of their receptions a friend introduced me to him and he looked me up and down with a leer on his face that made me shiver.  I remember him saying something like ‘You sure do look delicious.’  I walked away from him and stayed away for the rest of the evening.”

The fact that someone like Cain can become a presumed frontrunner in the Republican party is the saddest commentary of all.  Powerful men who abuse women are the lowest form of humanity yet those who support this cretin continue to back him and claim he’s a victim.

Herman Cain is a victim? His victims are the women he abused over the years because he had the position and the power to do so and the resources to get away with it.

From the time Politico broke the story of the sexual harassment claims filed against Cain during his tenure as President of the National Restaurant Association, Cain has lied, changed his story multiple times and turned to the tired old political trick of blaming the whole thing on his enemies.

He first claimed the story was untrue, a “smear” and said he didn’t remember any such incident, even though Politico had contacted his campaign a week earlier for comment. How do you forget being charged with sexual harassment unless it is such a part of your way of acting around women that it doesn’t seem like a big deal?

Stop blaming others because the truth about you is emerging Mr. Cain. The only person to blame is yourself and your sorry behavior.