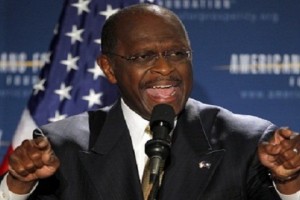 GOP Presidential contender Herman Cain, his campaign stalled by mounting allegations of sexual harassment, turned to an old political ploy Tuesday — attacking his accuser with smears and charges that she is a chronic lawsuit filer with a history of financial problems.

“The fact is that Ms. Bialek has had a long and troubled history, from the courts to personal finances – which may help explain why she has come forward 14 years after an alleged incident with Mr. Cain, powered by celebrity attorney and long term Democrat donor Gloria Allred,” the Cain campaign said today in an email to supporters.

Cain is expected to repeat the charges in a press conference scheduled for later Tuesday in Phoenix.

The tone of the email suggests Cain has no plans to admit any wrongdoing in the face of increasing revelations of his penchant for aggressive sexual behavior towards women.

Sharon Bialek, a former employee of the National Restaurant Association, said Monday that Cain reached under her dress and tried to touch her genitals in a car after dinner in Washington in 1999 and also tried to force her head into his crotch.

The Cain campaign denies the allegations but Capitol Hill Blue has learned that Cain did file an expense report showing a dinner with Bailek at a posh Washington restaurant not long after she was laid off by the association.

Other revelations about Cain’s behavior towards women are expected to surface as polls show support for the former GOP contender slipping.