Can Congress make a deal on debt-reduction? Maybe, maybe not 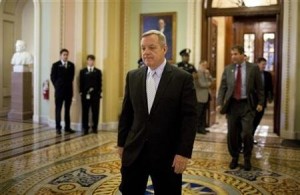 Is the Congressional “super committee” charged with crafting a debt-reduction compromise stalled in a partisan mess or are they making progress towards a deal?

Depends on who you talk to.

Congressional sources tell Capitol Hill Blue that both sides are closing in on a compromise that can find at least $1.2 trillion in budget savings over 10 years but caution that differences between Republicans and Democrats can still derail an agreement by the November 23 deadline.

Publicly, both sides take hard stances, giving the impression that any real movement is mired in a mudpit of partisan bickering.

After meeting for two months, the two sides appear far apart but insiders say the opponents are moving at an agonizingly slow pace towards a compromise.

“Republicans are mentioning the word ‘revenue.'” Dick Durbin, the Democrats’ number two in the Senate said Wednesday.  “That’s a breakthrough.”

The “breakthrough” was a proposal from Republican super committee member Sen. Pat Toomey, who suggested limiting tax deductions to bring more money into the federal budget to help cut deficits.

But is the proposal real or just political theater?

“We recognize this is a good-faith way to allow Democrats to say they got additional revenue by doing tax reform, cutting out a lot of loopholes,” Republican Sen. John Cornyn told Reuters.

Democrats have offered to back down from President Barack Obama’s demand for tax hikes on the rich.

“We cold be closing in on a deal,” says one congressional aide.