Newt rises from the political ashes 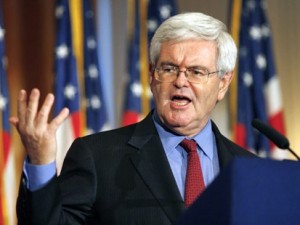 Newt Ginrich: Back from the political dead?

That’s right. In a campaign season that has seen GOP frontrunners come and go like smoke rings, Gingrich is — for the first time — in double digits among potential Republican voters one of the three current frontrunners in a volatile race for the right to challenge President Barack Obama in 2012.

Gingrich, rising from the ashes after a campaign ripped apart by staff defections and scandals over lavish lines of credit at Tiffany’s, is suddenly a contender.

Gingrich and Romney are tied at 15 percent with Cain leading at 18 percent.  Cain’s fortunes, however, are headed south, particularly with women voters.  The polls shows support from female Republican voters dropping 13 percent since accusations surfaced of past incidents of sexual harassment of female employees during his tenure as president of the National Restaurant Association.

But Cain’s support remains strong with tea party Republicans where 71 percent say they don’t care if the former Godfathers Pizza CEO abuses women or not.

“Cain’s support among tea party types just shows how they really don’t give a damn about the qualifications, ethics or character of their candidates as long as those candidates spout the correct right-wing message,” one GOP operative, who asked not to be identified, tells Capitol Hill Blue.  “He may be scum but he’s their scum and that’s all that matters.”

Political watchers say Gingrich’s sudden rise into the upper tear is one sign that the right wing is looking for someone to replace Cain as the conservative alternative to Romney now that Texas Governor Rick Perry’s campaign is crashing around him and Michelle Bachmann becomes an unpleasant aftertaste of Campaign 2012.

“Newt has his own problems, particularly where women are concerned, but he hasn’t been accused of harassment, at least not yet, and he may be there when Cain finally implodes,” says the GOP operative.

Gingrich, in the meantime, is pressing ahead, opening new campaign offices in Iowa, where the nation’s first caucus comes in just two months.