Ron Paul’s con: Using hatred of America to get rich 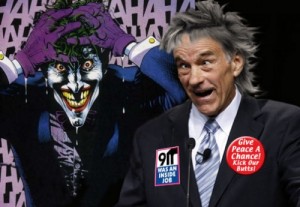 Ron Paul: The joker in an out-of-control political poker game?

Hypocrisy is the constant bedfellow of most — if not all — politicians and even afflicts Ron Paul, the so-called “savior of America” on the GOP primary ticket.

Yes, the grandfatherly doctor so revered by his followers is a flagrant hypocrite who evades the truth and preaches one game while practicing another.

If one is to believe the self-righteous proclamations of Ron Paul and his fanatical followers, the long-time Texas Congressman is so clueless that he had “no idea” that newsletters bearing his name spewed out racist, homophobic and anti-Semitic bile during the 1980s and 90s.

Yeah, right.  And there will be pork in the treetops by morning.

But it gets worse. Paul, if we are to believe his campaign spokesmen, also didn’t know that direct mail solicitations sent out over his signature encouraged Americans to “cash in” on the “coming chaos” by capitalizing on the misfortunes of others. He didn’t know that his direct mail pieces predicted a “race war” in big cities and claimed the Israeli lobby plays Congress “like a cheap harmonica.”

If this kind of behavior were attributed to Newt Gingrich or Mitt Romney, Ron Paul supporters would be flooding web sites with their usual collection of obscenity-spouting comments and emails attacking Romney and Gingrich.  They also resort to such tactics when defending the leader of their cult.

In the end, Ron Paul is just another double-talking con-artist who bilks millions out of a gullible following by playing on fear, paranoia and ignorance.  He allows race-baiting comments to be sent out under his name while voting for a national holiday for Dr. Martin Luther King.  That way he can still appeal to the racists and homophobes who make up such a large part of his base while cultivating the grandfather image with baseless claims to be concerned about ordinary Americans and the Constitution.

Consider this:  If Ron Paul couldn’t control what was done in his name as an on-again, off-again Congressman from Texas, how can we trust him as a leader of America?

Capitol Hill Blue took a look at Ron Paul’s finances and finds he is another political con man who uses his office and campaigns to make money at the expense of those dumb enough to buy into his act.

Want to pull down close to a millions bucks a year?  Just publish The Ron Paul Political Report and the Ron Paul Investment Letter for $99 annually and then deny any involvement when the crap hits the fan.

It doesn’t matter if the story changes or the excuses run from “the comments were taken out of context” to “I didn’t see them, I didn’t read them and I wasn’t aware of them.”

According to his Congressional financial reports, Paul banked the money from the newsletters.  Are we to believe he put nearly a million dollars a year into his bank accounts and didn’t look or care about the source of the money?

Every time he runs for President, Ron Paul holds on to most of the millions raised and then coverts those funds for his own use after he loses — which is exactly what will happen when he fails in 2012.

Such is the art of the con. Paul knows that no matter how unbelievable or outrageous his actions, his ardent followers will still defend those actions and claim he is a modern political messiah.  That is how cults operate and thrive.

The bottom line is simple: Ron Paul is a crook. He took the money. He just can’t take the responsibility.  He knows he can’t win but he knows how to cash in.

Ron Paul is no better than any other candidate.  In too many ways, he’s far worse.  He’s a zealot with a fanatical following that blindly buys into the hype of Ron Paul while ignoring the reality of the con.

Thankfully, some don’t take a bite of the Ron Paul apple.  Even the right-wing Wall Street Journal, owned by Rupert Murdoch, isn’t fooled:

Dorothy Rabinowitz, a member of the Journal’s editorial board, calls Paul “the best-known of our homegrown propagandists for our chief enemies in the world.”  In other words, someone who gives aid and comfort to the enemy.”

Most people call that treason.  We call it using a hatred of America to get rich.

When you take a close look at Ron Paul’s finances you find that he sells the United States short and invests heavily in South African and Canadian gold.  Paul is a millionaire several times over but he doesn’t invest in U.S. companies.  Since 2002, the bulk of his investments have been in Canadian mining firms and South African gold.

”This portfolio is a half-step away from a cellar-full of canned goods and nine-millimeter rounds,” Bernstein told the Journal.

Which may explain why so many militia types, homegrown terror organizations and survivalists support Ron Paul.

Ron Paul hates America. He wants it to fail so he can get rich.