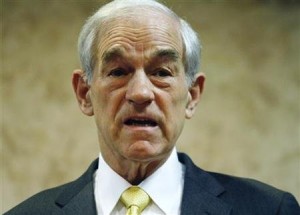 Ron Paul disavows newsletters and direct mail solicitations from the 1990s that spout doomsday scenarios but his speeches on the campaign stump with a week to go before the Iowa caucuses promote the same doom and gloom about the nation he wants to lead.

Even worse, non-partisan experts as well as members of his own party increasingly raise concerns about the extreme positions he espouses and the drastic changes he advocates.

“Paul appeals to people whose knowledge of major issues is superficial (and) he sees conspiracies where there are none,” Greg Valliere, chief political strategist at Potomac Research Group, tell Reuters. “If he does well in Iowa, which is likely, it will be an enormous embarrassment to the Republicans.”

Former Arkansas Gov. Mike Huckabee, winner of the 2008 Iowa caucuses, calls Paul “out of touch” with most Americans and the GOP.

Indiana Sen. Dick Lugar agrees, saying Paul is too extreme even for an American public fed up with status quo in Washington.

And while Paul claims the racist, homophobic, anti-Semitic and isolationist rants that spewed from his newsletter like verbal diarrhea in the 1980s and 1990s weren’t his, his words on the campaign trail sound some of the same messages.

A direct mail that Paul claims he didn’t write, didn’t see and didn’t approve, warned of “race wars” in the cities.

Here’s what he said at a recent campaign stop in Bettendorf, Iowa:

I’m afraid of violence coming. When you see what the government is preparing for, and the arrests and military law, and the demonstrations in the streets, some people aren’t going to be convinced so easily that you don’t owe them a living.

“He’s toned down the rhetoric but the message is the same,” a GOP strategist tells Capitol Hill Blue. “That message is ‘be afraid, be very afraid’ and the remarks about violence and ‘owe them a living’ has a racial tinge to it.  He knows that message will resonate with those who are afraid of people of color.  He appeals to base fears of unsophisticated voters who are driven by ignorance, not reason.”

Paul wants to dismantle the Federal Reserve, which provides the underpinning of the not only America’s economy but that of the world.  He claims there is a United Nations-driven conspiracy to take over America’s monetary system.

This monetary crisis is well known by the international bankers. They want the U.N. to come in and solve this problem. The dollar will probably eventually disintegrate and be taken over. But I don’t want the U.N. issuing that currency.

The answer, Paul claims, is a return to the gold standard — the same message advocated in those newsletters he said he didn’t write or approve and now disavows.

Paul’s proposal, economists say, would turn control of America’s money supply over to gold miners in South Africa and Uzbekistan.

“If you like what OPEC means for oil prices, you’d love what the gold standard would do to financial markets,” Michael Feroli, chief U.S. economist for JPMorgan Chase, told Reuters.

Meanwhile, more and more evidence surfaces that show Paul in 1996 not only did not deny writing the newsletters but even touted them in interviews and his campaign spokesmen at the time said the words were his.

A story in the July 1996 edition of the Austin American Statesman noted that Paul had refused to release copies of the newsletter in his Congressional campaign, saying that he had “written thousands of items over the past 20 years” and that releasing the copies would be “impractical.”  Paul, who was running against a lawyer, said releasing copies of the newsletters, which he did not deny writing, would be like asking his lawyer opponent to “provide documents for every lawsuit he has been involved in during his lengthy legal career.”

Dr. Paul is being quoted out of context. It’s like picking up ‘War and Peace’ and reading the fourth paragraph on page 481 and thinking you can understand what’s going on.

You have to understand what he is writing. Democrats in Texas are trying to stir things up by using half quotes to impugn his character. His writings are intellectual. He assumes people will do their own research, get their own statistics, think for themselves and make informed judgments.

The Paul campaign did not respond to requests for comment.