The Republican primaries: Much ado about nobodies 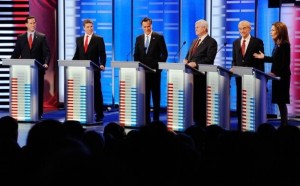 The GOP field: God, help us

The “official” Republican presidential primary season begins in a week with the Iowa caucuses.  Then we get down to real voting in New Hampshire, South Carolina, Florida and so on.

And for what?  To determine which loser running under the Republican banner wins the dubious right to go up against another loser — current President Barack Obama — in November 2012.

When we at Capitol Hill Blue look over the crop of candidates vying for the title we gotta wonder: “Where did they find these folks?”

Looking at the list of dismal choices, the mind boggles.  This is the best the GOP can do?  Given Obama’s many failures, beating him next year should be a walk but not with the gaggle contending for the top slot on the Republican ballot.

Looking at the pretenders…er, contenders:

Former Massachusetts Mitt Romney:  A so-called moderate in a sea of right-wing tsunamis, Romney  has led the pack for most of 2011, except when various flavors of the week like Donald Trump (who never formally announced), Michelle Bachmann, Rick Perry, Herman Cain and Newt Gingrich grabbed the spot light for their short time in the sun.

Romney, in his second-straight try, is the spit and polish candidate for 2012.  He has a message honed by the best consultants and focus groups that money can buy — and he has plenty of campaign cash, including his personal fortune.

But Romney is more product than candidate, a carefully-crafted package with shifting positions, varying opinions and changing themes depending on which special interest group that he wants to impress.  He’s an image candidate without depth, a suit without substance and a political robot designed to spew out any words that work with a target audience.

Unless things change drastically, he will probably win the nomination.

Former Speaker of the House Newt Gingrich:  The man who single-highhandedly brought an end to civility, coalition-building and cooperation on Capitol Hill.

Gingrich is a junkyard dog with the libido of a rabbit in heat.  His sexual appetite matches the wide ranging territory of former President Bill Clinton and he has yet to meet a wife that he won’t dump for something younger. Calista is the current trophy wife but that can change if something younger and more willing comes along.

He was a frontrunner for a while, until his considerable baggage began to spill out of a dark and sordid closet;

Texas Congressman Ron Paul. If enthusiasm from a small but fiercely loyal band of followers could translate into votes, Paul would be on his way to a nomination but voters aren’t sure which Paul is real:  The grandfatherly, gentle Libertarian or the fire-breathing anarchist who predicts race wars in the cities and collapse of America as we know it.

As scrutiny increases on Paul’s extremism and questionable past, his appeal decreases. After South Carolina he will be left to ponder what his fan base thought might have been but in reality never was;

Minnesota Congresswoman Michelle Bachmann: Christian fundamentalists say women should be seen and not heard.  Bachmann makes that dogma seem necessary.  The bombastic representative suffers from diarrhea of the mouth and lack of usable brain function.  Other women may be worthy of the presidential mantle but Bachmann ain’t one of them. Walk two steps behind the men honey. That’s where you belong;

Texas Gov. Rick Perry:  There are three things wrong with Perry:  His right-wing extremism, the fact that the last thing we need in the White House is another Texas Governor and….and…and…what was the third thing?

Perry is the Peter Principle in real time:  Every politician, given time, will rise to his (or her) level of incompetence;

Former Senator Rick Santorum:  What?  He’s still in the race?

Former Utah Gov. Jon Huntsman.  We want to like this guy.  We really do. After all, he rides a Harley but that’s about all he does.  He might finish third in New Hampshire but that will be his day in the sun.

There are a couple of others around but they should have followed Herman Cain and exited, stage right.

So who do we support?

Not a damn one.  If only “none of the above” were a choice…