FloydFest 2017 wrapped up Sunday with music from Marty Stuart and his band on the Main Stage on a sunny afternoon in a good year for the annual event just off the Blue Ridge Parkway at the Floyd-Patrick County line.

Even with rain that managed to fall, but not wash out, three of the five days, FF 17 appeared to run smoothly with good-sized crowds and few hiccups along the way.

Social media reports from those attending kept those who couldn’t make it this year in touch with the happenings.

As I limped home with an ankle that gave out Saturday evening as Railroad Earth played on the Dreaming Creek Main Stage, I realized that FloydFest 17 marked an even dozen of these events that I have covered with my cameras since returning to one of my childhood homes in 2004.

The aches from the ankle provided a reminder that, as I approach age 70 this year, I have found coverage of music festivals like FloydFest have been a big part of my life as a newsman and photographer.

For the 10 years in the 1970s, I covered the Mississippi River Festival on the grounds of Southern Illinois University at Edwardsville, Illinois — a summer-long series of concerts that included acts like The Who, Grateful Dead, the Eagles, Arlo Guthrie & Pete Seeger, Gordon Lightfoot, Harry Chapin and others.

FloydFest, with its nine stages and many musical acts over nearly a week of camping and fun in the Blue Ridge Mountains, is a lot different in style and structure from a series of afternoon and evening concerts over three months each year but the crowds that attend both are music fans and those who seek a respite from the stress and responsibilities that pull at each of us in most of our lives.

FloydFest, in the eyes of some, is a “hippie festival” but it is far more.  It has evolved into a family event that draws fans of all ages from around the country and world.  I had lunch Saturday with a Iraq war veteran attending, for the first time, with his wife and children.  I sat for a while in a tent of retired college professor Nick Piazza and Rebecca Yaeger-Piazza, who retired to Floyd County after long careers in education, psychology and more.  Nick is a fellow motorcycle rider and we spend time together on the road.

Yes, there are alternative lifestylers at FloydFest, but when an event draws 10,000 people or more each July, they are only part of a crowd that one encounters over the days and nights.

Sam Lorton and his companion, Alicia Everston, work in Silicon Valley, California, and have driven cross-country for the last nine years to camp and enjoy FloydFest.  Don Helton is a retired police officer from Colorado and attends each year with his wife, Celeste, and brought along three grandkids this year.

“You know, this year’s Fest had an interesting mix of up-and-comers on stage that gave great shows,” Lorton said.  “It provided a good mix of fine entertainment.” 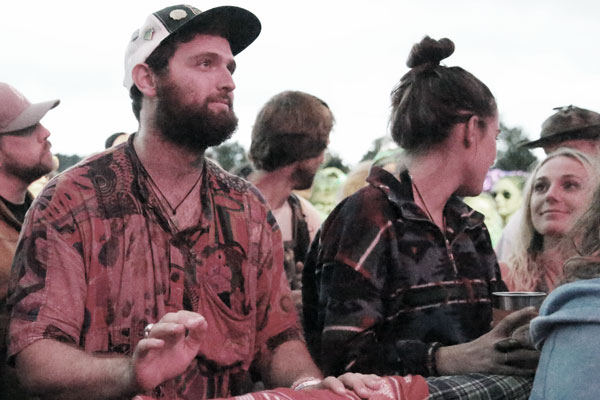