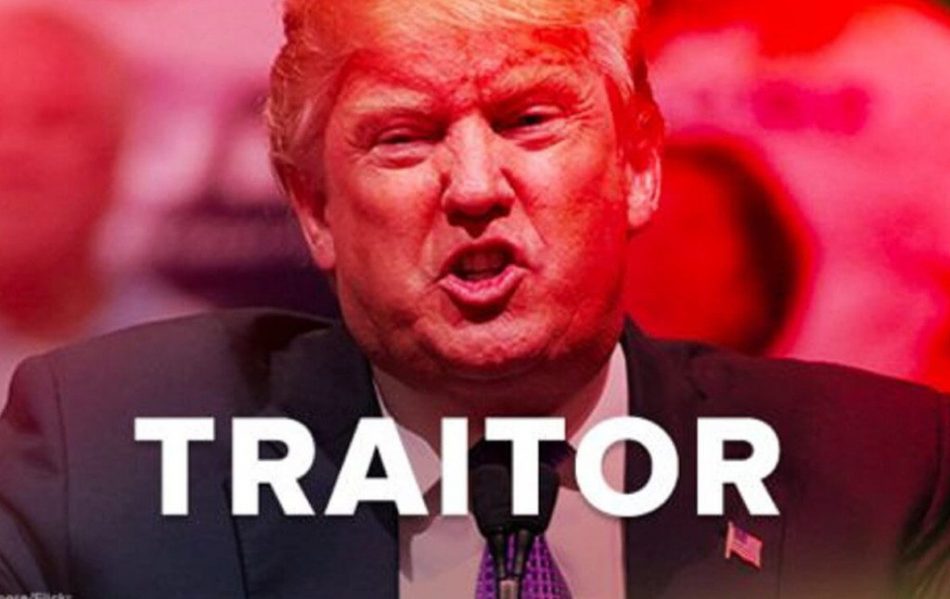 In the impeachment trial of Donald John Trump, the proven, corrupt, criminal 45th President of the United States, the ruling political party decided, without reviewing any evidence that they would betray their oath of office and become traitors to the nation.

Trump, whose dishonorable time in office, has brought American democracy to the brink of destruction, has already proven to be a traitor and the Senate majority led by the equally duplicitous Mitch McConnell became full collaborators in a sham trial that refused to hear testimony or review additional evidence.

“The Republican-led Senate has sent a very clear message,” writes E.J. Dionne Jr. in The Washington Post. “President Trump can get away with anything.”

It was painful to watch 51 senators vote away their power to hold the president accountable by rejecting a demand for witnesses and documents in the impeachment trial. The Senate calls itself “the world’s greatest deliberative body.” Those words will now provoke only derision and sorrowful laughter.

This was no ordinary roll call. It was a direct assault on American democracy and our core freedoms. Whatever the flaws of our system, we could once believe that a president who tried to bring down a political opponent by conspiring with a foreign government — and using American taxpayer dollars in the process — would be punished. The Trump 51 told us that such faith is for suckers.

Trump is a traitor and corrupt president because he can get away with it. He has been breakng the law for most of his life.

Trump first learned this approach from his father and benefactor, Fred. The Trumps didn’t want black people living in their apartment buildings in the 1960s, so they refused to rent apartments to many black people. It was illegal, but the government did not care enough about racism to impose serious punishment.

The Trumps also wanted to be richer than their business was making them. So they committed financial fraud, evading taxes to increase Trump’s inheritance from his father. Again, they got away with it.

After Donald Trump took over the business, he stiffed workers, contractors and lenders. He claimed to be wealthier than he was. He cheated on his wives and, according to more than a dozen different women, committed sexual assault. With his casino business close to collapse, he used his celebrity to reinvent himself on reality television. When you’re a star, they let you do it.

Trump next brought this approach to politics. It explains the constant lying, the insults and bigotry, the threats of violence and prosecution and the cozying up to foreign enemies. It also explains his perceptive claim that he could shoot someone on Fifth Avenue and not get in trouble. Trump does what he thinks is best for him, often in open defiance of rules or customs that constrain almost everybody else.

The impeachment trial has been a case study. No American president before Trump would have dared to collaborate openly with foreign countries for partisan advantage. Trump has done so repeatedly, starting in the summer of 2016 with Russia and then with China, Ukraine and perhaps unknown others. He had the ability to do it, so he did it.

Trump is one of the most successful con men in American history, aided by a political party he co-opted and a gullible public who brought into the con.

Conservative Republican Max Boot left the party of the cringing elephant the day after Trump won election to office in 2016.

I was recently asked if I would ever rejoin the Republican Party after having registered as an independent the day after President Trump’s election in 2016. The answer is an emphatic no. Trump will leave office some day (I hope!), but he will leave behind a quasi-authoritarian party that is as corrupt as he is. The failure to call witnesses in Trump’s impeachment trial revealed the GOP’s moral failure.

Senators who shirk their constitutional duties are cowards who disgrace their oaths of office and betray the Constitution. Our troops risk their lives for this country; these senators won’t even risk some unpleasantness.
I want nothing to do with a party led by the deluded and the dishonest. I fervently hope our democracy survives this debacle. I fervently hope the Republican Party does not.

Donald Trump is a true enemy of America and its people.

So is Mitch McConnell, the autocratic Senate majority leader who sold out his country

And so are all but the two Republican Senators who abandoned America to protect the criminal in their midst.

Traitors all, emboldened by anyone who puts their party above country.