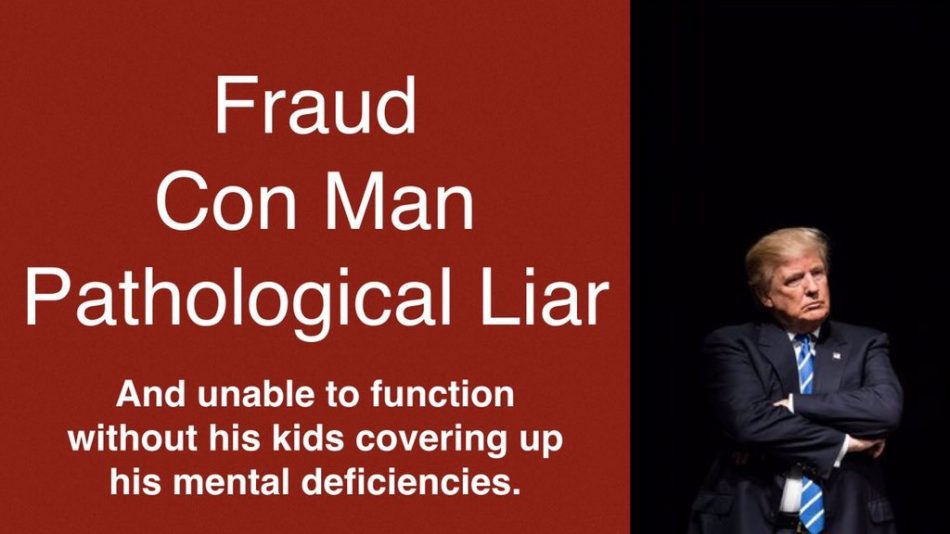 It is easy to describe the corruption, criminality and carnal cravings of America’s wannabe dictator and incompetent president Donald John Trump

First his failings. There are many.

His appointments have been failures and working at the White House has become a revolving door forced by those who quit, been fired, charged with crimes or in prison — all in an uncompleted first term.

Trump’s ratings continue to fall as even his ardent supporters are backing away from him as he continues to mishandle and subvert the coronavirus pandemic.

On one day, Maureen Dowd found a plethora of Trump failures and misdeeds;

On Thursday, as China played King Kong with Hong Kong; as unemployment rose to 38.6 million; as broken dams unleashed a flood in Central Michigan; as the president continued to stubbornly and recklessly claim he was taking hydroxychloroquine, causing sales to soar; as the news sunk in that if the U.S. had acted even a week sooner on social distancing that 36,000 people might still be alive; as Senate Republicans finally cemented themselves to Trump and his crazy schemes; as Trump stuck to his threat of withholding federal funds to Michigan and Nevada if those states enabled voters to vote; as a partisan know-nothing was put in charge of all our intelligence; as Trump pulled out of another major arms control pact; as Mike Pompeo basked in getting Trump to fire another inspector general (this one looking into a backdoor deal to sell arms to Saudi Arabia and brazen grifting by the Pompeos), the cliffhanger president made sure the focus was on just one little thing: Would he or wouldn’t he wear a mask as he toured the Ford plant in Ypsilanti?

Most presidential candidates fudge on campaign promises but Trump is a serial liar who has long scrapped truth as a need.  BBC reports:

The lack of stability in the White House has shown when it comes to measuring Mr Trump’s success with policy.

He has had trouble delivering in areas where he’s needed to navigate the corridors of Congress, despite controlling both chambers until Democrats regained the House at the start of January.

On healthcare, for example, he failed on his promise to kill off President Obama’s Affordable Care Act, which helped more than 20 million previously uninsured Americans get health cover but suffered from rising premiums.

Trump, as a person and politician, is riddled with flaws. But he also has an ignominious superpower: He is completely unencumbered by the truth, the need to tell it or accept it. He will do and say anything that he believes will help him. He has no greater guiding principles. He is not bound by ethics or morals. His only alliances are to those who would support and further his devotion to self-promotion.

Fact Checkers find that Trump has lied more than 18,000 times in the previous 1,170 days. That averages out to over 15 lies a day.

I’ve spent more than half a century reporting on and working around presidents, Congress, and the antics of Washington. Most were failures in some things but not one comes close to the deceit, corruption, and destructive acts of Donald John Trump.

He is a racist, a liar, and a disgrace to this nation and its people.