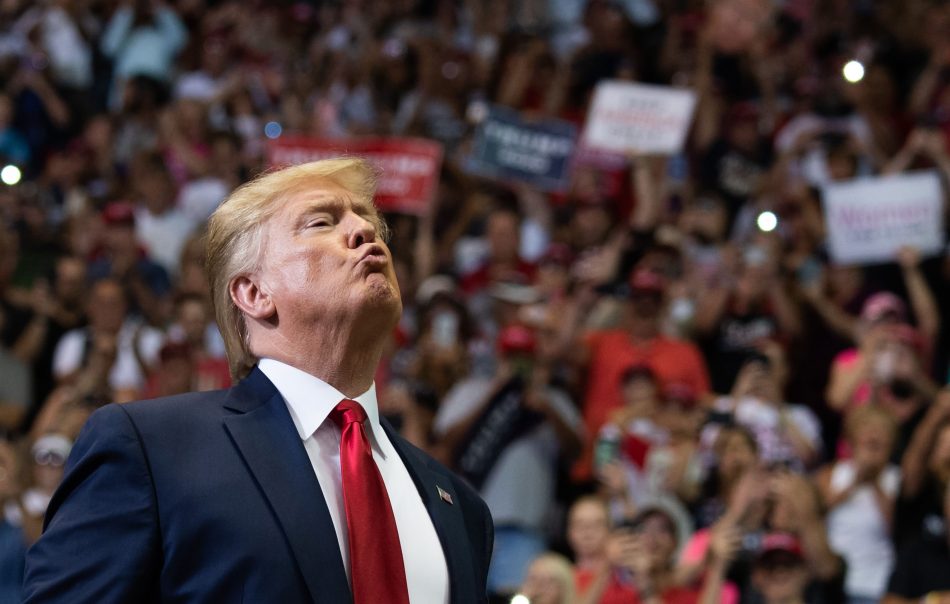 Donald Trump: This is a president? (Photo by SAUL LOEB / AFP)

So, how is America’s corrupt and corrosive president spending his holiday weekend?

About like he used to do on weekends without the virus.

In the future, when we look back on this dark period, we should resist the temptation to focus solely on Trump himself. To do so would be to excuse those who know exactly what he is but pretend they can work to keep him in office and remain unsullied. They cannot, and their moral culpability becomes clearer every day.

As the death toll in the coronavirus pandemic neared 100,000 Americans this Memorial Day weekend, President Trump derided and insulted perceived enemies and promoted a baseless conspiracy theory, in between rounds of golf.

He revived long-debunked speculation that a television host with whom Trump has feuded may have killed a woman and asserted without evidence that mail-in voting routinely produces ballot stuffing.

He made little mention of the sacrifice Americans honor on Memorial Day or the grim toll of the virus.

In fact, Trump’s barrage of social media attacks stood in sharp contrast to a sober reality on a weekend for mourning military dead — the number of Americans whose lives have been claimed by the novel coronavirus has eclipsed the combined total of U.S. deaths from wars in Vietnam, the Persian Gulf, Iraq and Afghanistan.

Trump plans to attend a wreath-laying ceremony at Arlington National Cemetery on Monday and visit Fort McHenry in Baltimore, where the 1814 battle that inspired “The Star-Spangled Banner” was fought. The city’s Democratic mayor had discouraged the visit, saying it sent conflicting messages about the importance of staying home and protecting other Americans.

Although Trump on Friday had called for worshipers to return to church in person this holiday weekend, the president did not. He played golf on Sunday morning.

Joe Biden highlighted the rising death toll with images of health-care workers treating the sick and video of Trump playing golf as Democrats have questioned whether the president is capable of empathy.

The White House on Saturday announced that Trump would travel next week to Florida, his fourth trip to a political battleground state in as many weeks, as he encourages a return to regular life and commerce in much of the country.

“Cases, numbers and deaths are going down all over the Country!” Trump tweeted, incorrectly, on Sunday.

What a classless, uncaring hypocrite. Donald John Trump is an embarrassment to the country, to the world, to humanity.

Lincoln’s Gettysburg Address is one of the most sacred documents in U.S. history because it embodied at once an unapologetic humility in the face of death (“the world will little note, nor long remember what we say here”) and an insistence that those who died had already transformed their nation.

“We here highly resolve that these dead shall not have died in vain.” Lincoln declared “that this nation, under God, shall have a new birth of freedom — and that government of the people, by the people, for the people, shall not perish from the earth.” Memorial Day began as Decoration Day in 1868, an occasion for laying flowers at the graves of the Union dead. It is an appropriate time to remember how Lincoln drew us from death to birth and a redefinition of the nation’s purpose.

We will honor this Memorial Day confronting 100,000 deaths from a pandemic. Unlike wars, pandemics have no stated purpose. And unfortunately, we lack a moral interpreter of Lincoln’s character in the White House.

The Editorial Board of The New York Times says:

In this frightening and uncertain time, we’ve had to absorb many new and disconcerting concepts — from social distancing to flattening the curve to community transmission to case-fatality rates. We’ve been reminded repeatedly that we aren’t doing enough to stem the spread of the coronavirus, that we are a “failed state,” unable to manage the greatest existential threat in our lifetimes. The country that calls itself exceptional has long lines at food banks, strained public health systems and millions of its own citizens wondering how they’re going to keep the lights on and their families fed.

This weekend, as we honor those who made the ultimate sacrifice in defense of our country, it’s worth pausing to acknowledge the smaller but essential patriotic sacrifices we are all making today, for one another.

In this weekend when we must pause to honor the dead of both those who wore the uniform and died in service to our country but also those who died of a pandemic that was mishandled by the most corrupt and incompetent president in American history.

Trump is a blatant, overbearing hypocrite who lies when he calls other liars, berates those overweight when he is morbidly obese, suggests a former Republican Congressman killed a staff member when studies document how his actions murdered more than 36,000 Americans when he sat on his fat ass and did nothing to deal with the pandemic when it was needed most.

He has many hypocrites around him: His lying wife and family,, his “yes dir” aides, and the clueless voters who cast their ballots for him in 2016 and say they will do the same in November of this year.

Trump is a disgrace to America. So are cowardly Republicans who let him ignore the law, any value worth honoring and the Constitution of the United States.

And so are those who vote for him.