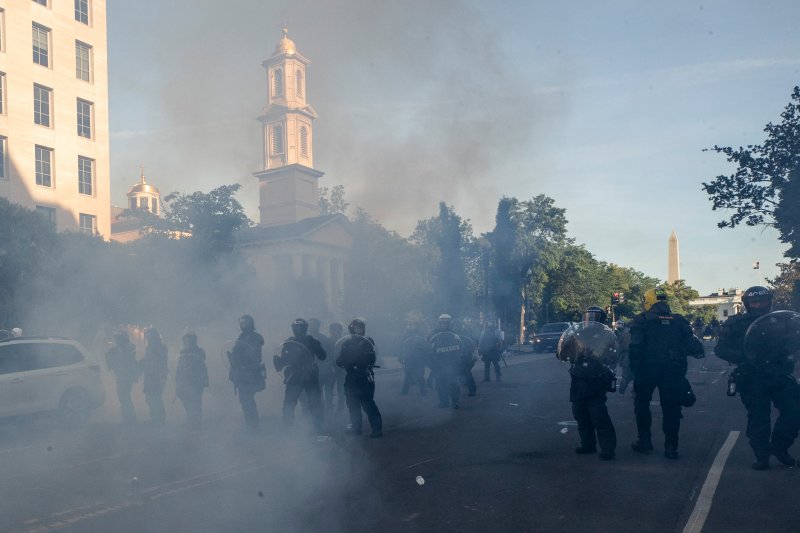 Tear gas floats in the air as a line of police move demonstrators away from St. John’s Church across Lafayette Park from the White House. (AP Photo/Alex Brandon)

As the nation continues to struggle to deal with the double-whammy of widespread protests driven by another murder of a black man by out-of-control police brutality and the pandemic threat of the coronavirus, unhinged president Donald Trump ordered soldiers and Secret Service to clear a path through peaceful demonstrators with tear gas, loud flash-bang shells and rubber bullets just so he could have a photo-op next to St. John’s Episcopal Church near Lafayette Park near the White House.

Trump awkwardly held up a borrowed Bible as a prop as he posed for photos at the church and White House staff members put on plastic smiles as they joined him for cheeky touristy photos.

We long ago lost sight of normal, but this was a singularly immoral act. The president used force against American citizens, not to protect property, but to soothe his own insecurities. We will all move on to the next outrage, but this was a true abuse of power and should not be forgotten.

Trump’s relentless debasing of America and its traditions brought anger from Republicans and Democrats alike.

“Trump must be removed,” said Conservative icon George F. Will in an angry and pointed column. “So must his congressional enablers.”

“This weak person’s idea of a strong person, this chest-pounding advertisement of his own gnawing insecurities, this low-rent Lear raging on his Twitter-heath has proven that the phrase malignant buffoon is not an oxymoron,” Will writes. “The president’s provocations — his coarsening of public discourse that lowers the threshold for acting out by people as mentally crippled as he — do not excuse the violent few. They must be punished. He must be removed.”

“I am outraged,” said The Right Rev. Mariann Budde, bishop of the Episcopal Diocese of Washington. “I don’t want President Trump speaking for St. John’s.”

There, unfolding on live television Monday night, was a dystopian horror. Federal authorities attacked peaceful protesters outside the White House with tear gas, flash-bangs and rubber bullets, as Trump, with Orwellian gall, stood in the Rose Garden proclaiming himself “an ally of all peaceful protesters.” Trump threatened to mobilize federal troops against U.S. citizens on U.S. soil without permission from governors — an act associated with totalitarian countries — then walked across Lafayette Square to St. John’s Church where he held aloft a Bible. Peaceful protesters had been gassed and forcibly dispersed so Trump could have a photo op.

This disgusting scene was long in the making. He ignored an approaching pandemic, turning a crisis into a catastrophe in the United States and worsening the biggest economic collapse since the Great Depression, with more than 40 million out of work and upward of 100,000 dead. Meanwhile, his constant tearing at the fabric of civil society, his dismantling of the institutions that bind us, and his glorifying of racism and violence have ultimately set America ablaze.

Even Fox News’ Tucker Carlson slammed Trump for his callow publicity stunt, saying the president is “abandoning the country and only thinking of himself. This is how nations collapse.”

“Tear-gassing peaceful protesters without provocation just so that the president could pose for photos outside a church dishonor every value that faith teaches us,” Speaker of the House Nancy Pelosi and Senate Minority Leader Chuch Schumer said in a joint statement Monday night. “We call upon the president, law enforcement, and all entrusted with the responsibility to respect the dignity and rights of all Americans.”

At this challenging time, our nation needs real leadership. The president’s continued fanning of the flames of discord, bigotry and violence is cowardly, weak and dangerous.

“A full 25 minutes before the curfew & w/o provocation, federal police used munitions on peaceful protestors in front of the White House,” Bowser tweeted.

Earlier on Monday, Trump told a conference call with America’s governors that they “have to dominate. If you con’t dominate, you are wasting your time.”

In Louisville, KY, police and National Guardsmen opened fire after the claimed someone had fired on them and killed David McAtee, a black man, and owner of a popular city barbeque restaurant. He was not armed.

After Kentucky Gov. Andy Beshear urged police to release any and all available video on the incident, many officers claimed they have not activated their body cameras. Louisville Mayor Fred Fischer fired the city’s police chief on the spot.

Beshear may seek transparency in Kentucky, but all Donald Trump seeks is self-glorification and he strips America of its last vestige of honor and respect in his vile raping of the nation he is destroying.

He has added Lady Liberty to his ever-growing list of women he has debased, sexually-assaulted, and raped for his own degenerate lust.