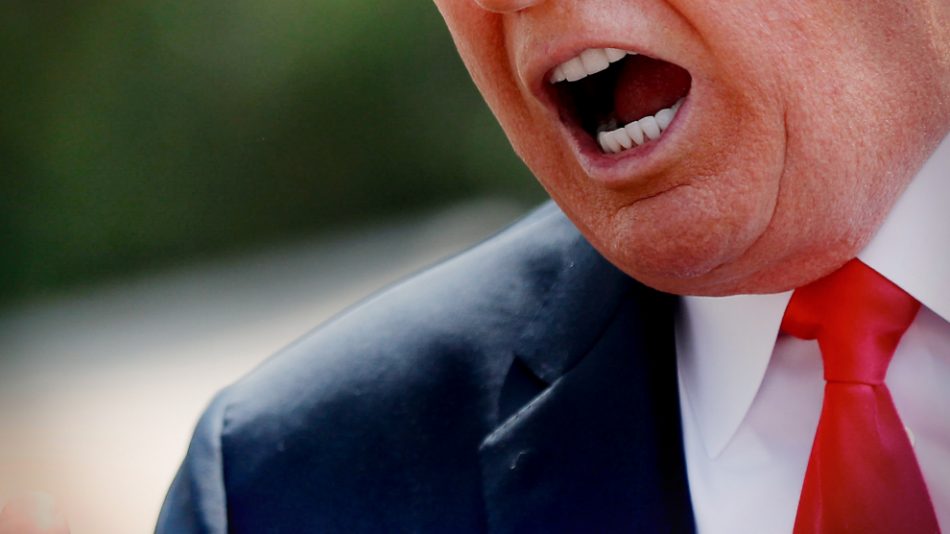 For an increasing number of those who have watched America deteriorate and dissolve under the corrupt presidency of Donald John Trump, the destruction of a once-great nation is almost complete.

Columnist Max Boot says he is humiliated over what America has become under Trump.

On Monday, Trump raged at governors that they would look “weak if they don’t use force to “dominate” demonstrators. He pledged to put Gen. Mark Milley, chairman of the Joint Chiefs of Staff, in charge of dealing with protests, while Defense Secretary Mark T. Esper spoke of the need to “dominate the battlespace — i.e., American cities. Sure enough, troops streamed into the nation’s capital and military helicopters buzzed demonstrators as if they were insurgents in Iraq. On Monday night, Trump ventured out of his lair, employing security forces to tear-gas and bludgeon peaceful protesters so he could stage a bizarre photo op in front of a church, brandishing a Bible as if he had never seen one before. He is acting like a Central Asian autocrat rather than the leader of a constitutional republic.

The world is watching, and it is appalled by what it sees. Germany’s Süddeutsche Zeitung summed it up: “Trump declares war on America.” Our allies are mortified; our enemies are gleeful, because Trump has handed them a priceless gift. Every tinpot dictator can now savor a moment of unearned moral superiority over a country that has spent decades lecturing them on human rights. Chechen strongman Ramzan Kadyrov: “I am horrified by watching the situation in the United States, where members of the authorities brutally violate the rights of regular citizens.” The Iranian press quotes Ayatollah Khomeini: “America has begun the process of its own destruction.” A North Korean newspaper decries “a white policeman’s brutality.”

“To have the rest of the world pity the United States — that’s a humiliation I never thought I would see,” Boot writes in his column. “But pity doesn’t seem so bad compared with how the world feels about us now. We have become an international pariah because of the way that our police forces mistreat people of color with the encouragement of our racist president.”

Trump’s actions angered Episcopalian Bishop Mariann Edger Budde and St. John’s Church, the site of his appearance with a Bible, is in her diocese.

“The president just used a Bible and one of the churches of my diocese as a backdrop for a message antithetical to the teachings of Jesus and everything that our church stands for,” she said.

Then Trump doubled down with his use of religious sites to serve his nefarious stunts on Tuesday by going to a Catholic shrine honoring in Washingon honoring Pope John Paul II .

Washington Archbishop Wilton Gregory called Trump’s visit “reprehensible that any Catholic facility would allow itself to be so egregiously misused and manipulated in a fashion that violates our religious principles, which call us to defend the rights of all people even those with whom we might disagree.”

Gregory called Trump’s visit a sacrilegious use of the late pope’s memory.

“He certainly would not condone the use of tear gas and other deterrents to silence, scatter or intimidate them for a photo opportunity in front of a place of worship,” Gregory said in a statement to the media.

Two ministers, in an OpEd that appeared on the Washington Post website Tuesday afternoon, said Trump’s use of the Bible as a political prob was “obscene, even for him.”

On Monday evening, federal authorities used tear gas to clear Lafayette Square so President Trump could pose for a photo while holding a Bible in front of St. John’s Episcopal Church. It wasn’t the first time Trump has used the word of God as a political prop. But it was obscene, even for him.

We need to read the Bible and live it, not wave it for the cameras.

The presiding bishop of the Episcopal Church, Michael Curry, tweeted on Monday evening that the president had “used a church building and the Holy Bible for partisan political purposes.” While that is true, we find it even more outrageous that Trump and the religious extremists he appeals to have turned Christian faith against itself.

As preachers in the South, one black and one white, we are painfully aware of the ways Christian faith has been used to justify slavery, white supremacy, legal segregation, corporate exploitation, the dominance of women and the dehumanization of LGBTQ people. As Frederick Douglass put it, “Between the Christianity of this land, and the Christianity of Christ, I recognize the widest possible difference.”

We need to read the Bible and live it, not wave it for the cameras.

Jennifer Rubin points not only to Trump but says his enablers have contributed to America’s demise.

The events of Monday — the violent suppression of peaceful protesters (coupled with a threat to use the military against American civilians) so that President Trump could stage a photo op and besmirch the Bible — were not Trump’s doing alone. Those who enabled and participated — including Attorney General William P. Barr, chairman of the Joint Chiefs of Staff Gen. Mark A. Milley, Ivanka Trump and federal police, to name a few — are equally to blame for the debasement of the presidency and a house of worship.

The list of those who were present or helped pull off the stunt is merely the tip of the iceberg, a small subset of those whom history will hold responsible for the serial failures, outrages and perversions of this administration.

Certainly, every Republican senator who voted to acquit Trump in his impeachment trial shoulders part of the blame for Trump’s conduct that followed. That includes the firing of inspectors general; the blunders in failing to address the pandemic (and the ensuing death of more than 100,000 Americans and loss of 40 million jobs); the racial incitement; the abuse of peaceful demonstrators; and the threat to deploy the military against American civilians. There are 23 Republican incumbents in the Senate on the ballot in November. Every last one of them should be booted out and have his or her name “tied to his with a cord of steel and for all of history,” as House impeachment manager Rep. Adam B. Schiff (D-Calif.) put it.

Sadly, only a few GOP members of Congress admit Trump is way out of line.

“There is a fundamental — a constitutional — right to protest, and I’m against clearing out a peaceful protest for a photo op that treats the word of God as a political prop,” says Nebraska GOP Senator Ben Sasse.

Sen. Tim Scott of South Carolina, the only black Republican Senator says: “If your question is, ‘Should you use tear gas to clear a path so the president can go have a photo op?’ the answer is no.”

Rep. Adam Smith, chairman of the House Armed Services Committee, says Trump’s language, especially when he says he wants states “to dominate the battlespace” when it comes to protesters.

“Language like that is deeply concerning in terms of how the military could be used for domestic law enforcement,” Mr. Smith said.

Democrat Rep. Abigail Spanberger of Virginia, a former C.I.A. officer says Trump’s actions are what she has been “undertaken by authoritarian regimes throughout the world.”

I know this playbook, and I know the president’s actions are betraying the very foundation of the rule of law he purports to support — the U.S. Constitution.”

Rep. Steny H. Hoyer, the Maryland Democrat and majority leader of the House, says Trump’s actions may well require censure of Trump by the House.

“This can’t happen in America,” Hoyer says. “It is certainly an action worthy and appropriate to censure and to criticize.”

Conservative columnist George Will says that is not enough.

“Four years of this? That taste of ashes, metaphorical and now literal, dampens enthusiast, Will says. “Those who think our unhinged president’s recent mania about a murder two decades ago that never happened represents his moral nadir have missed the lesson of his life: There is no such thing as rock bottom. So, assume that the worst is yet to come.”

Trump must go, Will says with no hesitation and any purge of the most corrupt president in American history, must also include his enablers:

The measures necessary for restoration of national equilibrium are many and will be protracted far beyond his removal. One such measure must be the removal of those in Congress who, unlike the sycophantic mediocrities who cosset him in the White House, will not disappear “magically,” as Eric Trump said the coronavirus would. Voters must dispatch his congressional enablers, especially the senators who still gambol around his ankles with a canine hunger for petting.

In life’s unforgiving arithmetic, we are the sum of our choices. Congressional Republicans have made theirs for more than 1,200 days. We cannot know all the measures necessary to restore the nation’s domestic health and international standing, but we know the first step: Senate Republicans must be routed, as condign punishment for their Vichyite collaboration, leaving the Republican remnant to wonder: Was it sensible to sacrifice dignity, such as it ever was, and to shed principles, if convictions so easily jettisoned could be dignified as principles, for . . . what? Praying people should pray, and all others should hope: May I never crave anything as much as these people crave membership in the world’s most risible deliberative body.

Let the purge begin before it is too late.