A cornered, faltering Trump is a dangerous monster 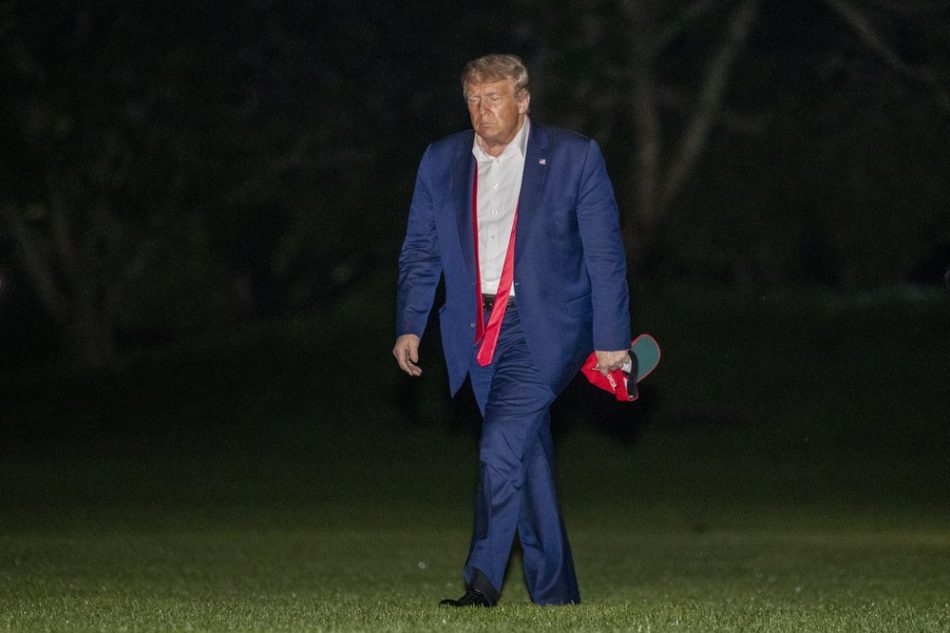 Unhappy, bitter Donald Trump walks on the South Lawn of the White House in Washington as he returns from a campaign rally in Tulsa, Okla. (AP Photo/Patrick Semansky)

A bitter, dejected Donald Trump, his tie hanging loosely found his neck, walked alone from the helicopter to the White House after a return from a promised “record crowd” that didn’t even fill more than a third of the 19,000 seats in the Tulsa, OK, arena Saturday night.

White House sources confirmed that Trump spent much of the flight back to Washington screaming at aides, blaming them individually and collectively for the comeback rally that bombed in a state that he won by 36 percent in 2016.

Besides aides, Trump blamed media, protestors and anyone else he could think of for a faltering presidency that, in the end, is his fault and his alone.

The Republican president did not offer even a token reference to national unity in remarks that spanned more than an hour and 40 minutes at his self-described campaign relaunch as the nation grappled with surging coronavirus infections, the worst unemployment since the Great Depression and sweeping civil unrest.

Nor did Trump mention George Floyd, the African American man whose death at the hands of Minnesota police late last month sparked a national uprising over police brutality. But he did add new fuel to the nation’s culture wars, defending Confederate statues while making racist references to the coronavirus, which originated in China and which he called “kung flu.” He also said Democratic Rep. Ilhan Omar, who came to the U.S. as a refugee, “would like to make the government of our country just like the country from where she came, Somalia.”

“There’s really only one strategy left for him, and that is to propel that rage and anger and try to split the society and see if he can have a tribal leadership win here,” said former Trump adviser-turned-critic Anthony Scaramucci on CNN’s “Reliable Sources.”

“Trump’s problem in Tulsa wasn’t just empty seats,” said the headline on a column by Ruth Marcus in Sunday’s Washington Post. “It was empty rhetoric.”

Trump is reduced to a combination of scare tactics and jaw-dropping gaslighting. Electing Biden means that “your 401(k)s and money itself will be worthless.” Right, money itself. Biden is “a puppet for China,” more than a bit rich given Trump’s own former national security adviser’s description of the president’s begging for Chinese help to win reelection. The “Dems” will “eliminate private health insurance” and “ban fracking” — no matter that Biden does not support either of these steps. “They want to defund and dissolve our police departments, think of that” — no matter that Biden has rejected that approach.

And, classic Trump, “Racial justice begins with Joe Biden’s retirement from public life.” This from the president of “very fine people” on both sides of the Charlottesville protests. This from the president who could not, would not, make a single mention of George Floyd on Saturday night — but took pains to lament an “unhinged left-wing mob … trying to vandalize our history, desecrate our monuments, our beautiful monuments … demolish our heritage.” Our heritage. Tell me again where racial justice begins?

Trump came to Tulsa on the weekend that African Americans celebrate “Juneteenth,” the holiday for the emancipation proclamation to free slaves. He didn’t mention it during his speech. He figured his Lilly-white audience didn’t care.

Polls show Trump’s approval rating dropping, even among his so-called base. More and more Americans, numbed the flailing of a former “reality show” TV host, are no longer buying into his act.

Even Trump cheerleaders at Fox News report the latest polls show Trump falling 12 points behind Biden. He’s a cornered despot and that makes him twice as dangerous.

It’s precisely because Trump feels overwhelmed and outmatched that I fear we’ve reached a far scarier juncture: he seems to be attempting, however clumsily, to transition from president to autocrat, using any means necessary to mow down those who threaten his re-election.

As we know, Trump is surpassingly incapable of governing. But he has also shown authoritarian tendencies from the very beginning. For over three years, he’s been dismembering the body politic, institution by institution, norm by norm. What has largely spared us from total evisceration were honorable civil servants and appointees.

Trump has torn through almost all of them and replaced them with loyalists. He now has a clear runway. What we have left is an army of pliant flunkies and toadies at the agencies, combined with the always-enabling Mitch McConnell and an increasingly emboldened attorney general, William Barr.

Trump is in trouble and that makes him an increasing danger to our nation, our democracy, and the world.

Be wary. The monster that threatens us all resides at 1600 Pennsylvania Avenue in Washington.