Celebrate Independence Day with goal to rid America of Trump 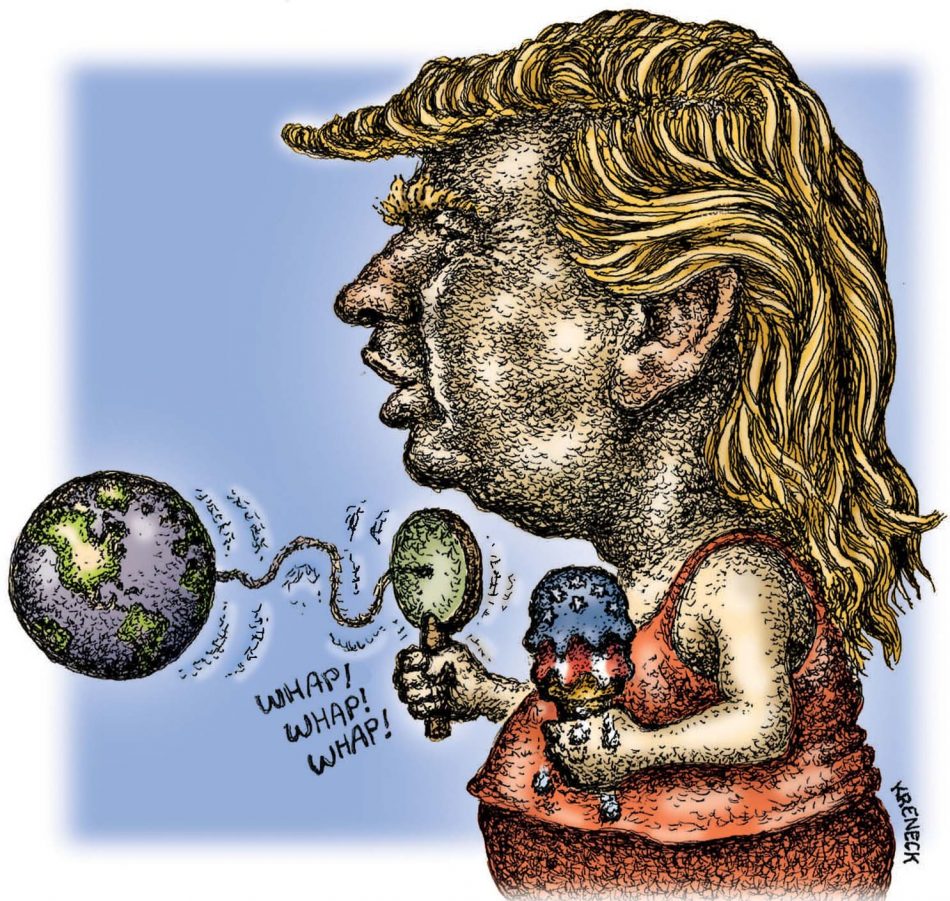 (Illustration by Kevin Kreneck of the Seattle Times)

We face two Americas on this 4th of July — Independence Day.

Trump, the infamous reality TV host whose show is always as far from reality as one should expect, kicked off his painful 4th of July at Mt. Rushmore in the Black Hills of South Dakota.

“The scene was also full of painful history, willful ignorance and deliberate fearmongering,” says Robin Givhan of The Washington Post.

Friday night, in an amphitheater in the shadow of Mount Rushmore, a military band played smooth jazz on snare drums and trumpets as the country sank under the rising number of covid-19 infections. Thousands of unmasked guests, awaiting the arrival of the president, sat shoulder to shoulder in black folding chairs tethered together in a kind of coronavirus chain of denial. The VIPs would, of course, be seated separately onstage — not six feet apart, but not amid the storm of exhalations, coughs, vociferous cheers and sneezes. And just to add to the upside-down, inside-out madness of the mass gathering, Ivanka Trump, presidential adviser and daughter, tweeted a reminder to be safe over the holiday weekend by social distancing and wearing a mask. Her nearest and dearest did not listen to plea.

Mount Rushmore is painfully complex — much like America itself. The faces of four revered, but profoundly flawed, presidents were carved into the stone by a talented sculptor who sympathized with the Ku Klux Klan. The majestic monument — a testament to human tenacity — scars land considered sacred by Native Americans.

But the president is not a man of complexity and nuance. He is a man who sees things in gloriously righteous white and suspicious, dangerous black. For him, Mount Rushmore is not complicated. It’s telegenic. His was not an open-armed celebration of American independence and the country’s raucous striving to fulfill its promise. The president had orchestrated a rally — a place where he could wade into a warm embrace of approval.

The headline of her column on this Independence Day? “Trump got his crowd and his fireworks, and peddled his fiction.”

A life of fiction is about the least spiteful way one can call Donald Trump’s actions and presidency. He lies, he taunts, his peddles fantasies and baseless conspiracy theories. In a presidency that should be dedicated to truth and uniting this country, he peddles hate, racism, and bigotry.

“Our declaration this Independence Day should be liberation from Trump,” says the headline of a column by Colbert King.

“This July 4 is not a high old time in America,” King writes. “The nation is spending this national holiday in the midst of a deadly public health crisis that Trump, through negligence, incompetence and disgraceful self-regard, allowed to spread like a wildfire across the country.”

Yes, the Fourth of July is a date to honor. But this year, it is also a day of sorrow for where we now find ourselves.

The United States of America, created in 1776 by men who put love of country over their own private interests — who staked their lives, fortunes and their sacred honor on the cause of their new nation — is now in the grasp of a man whose entire life has been spent taking, while giving nothing in return.

Trump’s successes are displayed in shrines across the country and around the world emblazoned with his name — Trump towers, Trump plazas, Trump golf courses, Trump casinos, and Trump streets and roads. Trump’s love is limited to his private interests. He stakes his life and fortune only on the cause of Trump.

To further sully the celebration of the most pivotal day in U.S. history, the White House is in the grasp of a president who thinks the United States’ heritage is exemplified by the legacy of the Confederate flag and the traitorous generals who fought under that symbol of white supremacy.

Trump is a racist, anyone with an IQ above that of an average weed can recognize that. He is, for all practical purposes, America’s most dangerous domestic terrorist. He embraces white supremacists and openly welcomes their embrace and support.

“Trump’s warm embrace of white nationalism on Independence Day 2020 makes a mockery of the concepts of justice and liberty entrusted to the nation in the Declaration,” King writes. America must rid itself of Trump and the cancer he has brought into our society.

“This should be our declaration on this Independence Day,” says King.

Not just “should” Mr. King. It must be our solemn oath and goal.