Wannabe militias are easily conned into events that don’t exist 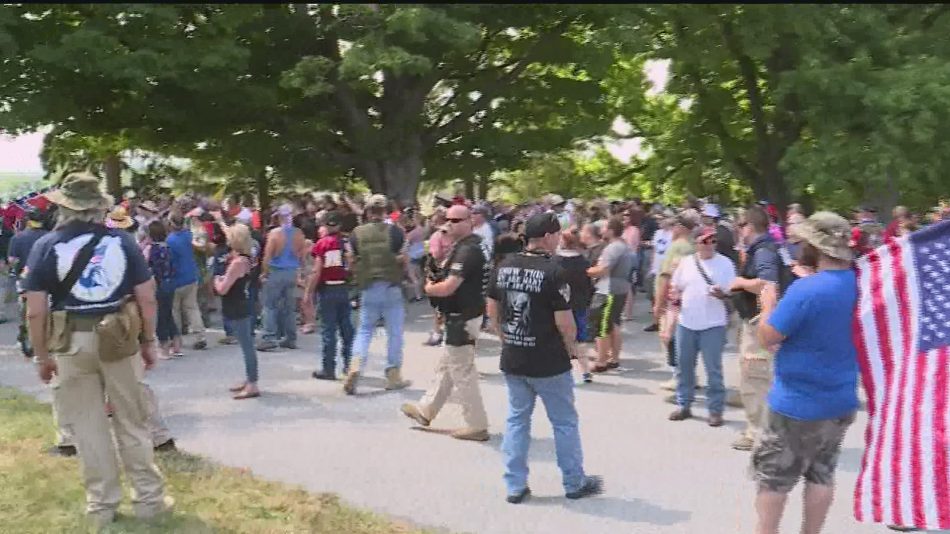 Militia on guard for an event that wasn’t on the 4th of July.

On social media, a hoaxster talked up a non-existent plan to overrun the Civil War battlefield of Gettysburg with protesters who would be burning American flags.

So the over-reactionary and under-prepared self-proclaimed militias brought their gun-toting followers, including bikers, skinheads, and other right-wing freaks out “in force” to keep it from happening.

The only problem was that the planned protest was never going to happen. It didn’t exist. It was a well-played hoax to embarrass the right-wing wackos who buy into what America’s corrupt and racist president says and prove they are the ones out of control:

The episode at Gettysburg is a stark illustration of how shadowy figures on social media have stoked fears about the protests against racial injustice and excessive police force that have swept across the nation since the death of George Floyd in police custody on May 25.

Several social media companies have shut down several fake accounts that turned out to be created by white supremacist groups posing as “Antifa operatives” in an effort to undermine peaceful protests.

One group, calling itself “Left Behind USA,” claimed to be 39-year-old Alan Jeffs, who said he was a lifelong Democrat-turned-anarchist in Des Moines. Turns out no such person exists.

Facebook shut down found several accounts (now shut down) created by the claimed Jeffs and several of them traced back to militia and white supremacist groups.

Fake, yes, but still enough to bring out the militia fanatics.

Macky Marker of Delaware militia First State Pathfinders called its members out to show up in force in Gettysburg.

If you plan on coming, I would plan on coming full battle-rattle … to be fully, 100 percent prepared to defend yourself and whoever you come with.

The person posing as Alan Jeffs claimed, in differing posts, to be a laid-off graphics designer, a former Uber Driver or the disk jockey who lived off food stamps and was sleeping on a friend’s couch.

On Twitter, he begged for funds for “gas money” because he was stuck trying to return from Ohio to attend his grandfather’s funeral.

He claimed his grandfather was a member of the International Brotherhood of Electrical Workers in Youngstown, Ohio, and died at age 96.

John Burgham, business managers of the IBEW Local 64 in Youngstown, found no deaths of anyone who matched that description.

“The member you described doesn’t exist,” Burgham told the Post.

The one photo used on social media of a man claiming to be Jeffs turned out to be a stock photo from depositphotos.com.

“I have been politically active since I was old enough to vote and have voted Democratic in every presidential and midterm election that I’ve been able to,” the person wrote in a private Facebook message to The Post.

However, election officials in Iowa said no one by that name has ever registered to vote anywhere in the state at any time.

Yet the non-existent person posted an image of a burning American flag on Facebook on June 11 with this text:

Central Pennsylvania Antifa’s Facebook page said the so-called gathering was a hoax and pointed to a similar one at Gettysburg three years ago. No protest was found there then but one of the militia members shot himself in the leg with his pistol.

Didn’t matter. Militia groups, not wanting to pass up an opportunity to parade around with their assault-style weapons with tactical gear hanging their bodies said local residents asked for their help. The so-called Pennsylvania State Militia promised to send in its  “county response team” to serve as “a deterrent against the enemy forces.”

But the only “enemy forces” were the skinheads and other gun-waving miscreants who call themselves militias.

Fortunately, this time around, no one shot themselves or anyone else.

Just another hoax that proves just how gullible these militia phonies can be.

(Our thanks to The Washington Post for its work on exposing this hoax and the foolishness of these wannabe militas.)