More and more Republicans now say they will vote for Biden 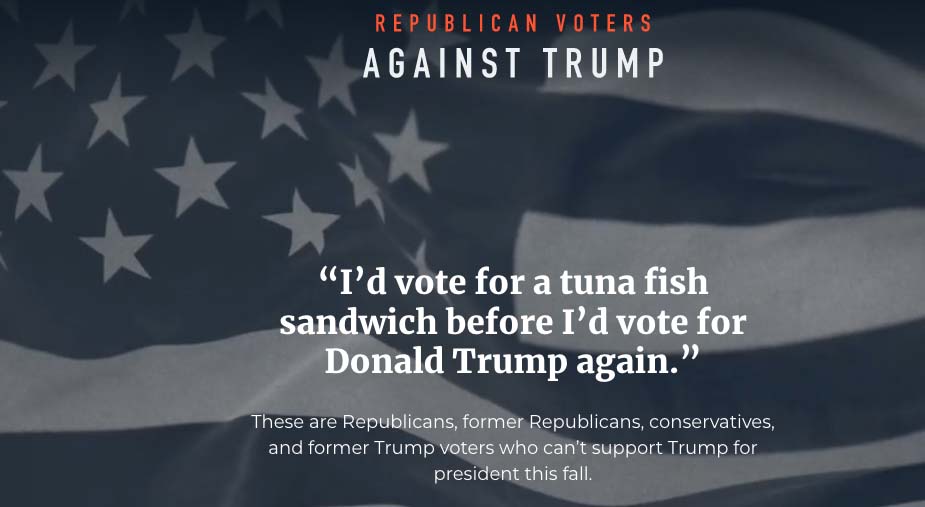 While Republicans in Congress seem willing to enable Donald Trump’s erratic drive to destroy America and democracy, a lot of Republicans out there say they didn’t like Trump in 2016 and like him even less now and are willing to vote for Democrat Joe Biden to rid our nation of its tyrannical despot.

Katie Glueck at The York Times found Republicans like former Florida state representative J.C. Planas, longtime New Hampshire official Peter J. Spaulding and Lorena Burns of Arizona, who say they will diverge from their GOP ranks and vote for Biden.

I’m willing to pay more money in taxes just to be away from him. He’s corrupting the country. Just the lying, just the craziness, the bullying — I’d rather pay more money than be with him for another four years.

They’re not alone. Republican Voters Against Trump is a growing organizations that is releasing testimonials. Veterans of the George W. Bush have a new political action committee that is supporting Biden.

RVAT are even using the words of Ronald Reagan against Trump:

Kristopher Purcell, a Bush aide in the White House Communications Office, says this year will be his first-ever vote for a Democrat.

“We have seen over the last four years what a Trump presidency means for the country, and it’s increasingly negative, it’s increasingly damaging,” Purcell told Gleuck. “We want to really focus on persuading historically Republican voters.”

In New Hampshire, Spaulding’s GOP credentials include serving as a chair forthe campaign of Republican Senator John McCain’s 2000 and 2008 bids for president, but he says a vote for Biden will help “do the things that need to be done to get our country back together again.”

Does he have reservations about voting for a Democrat:

“Not when the stakes are as high as they are this year,” he adds.

Glueck found many other Republicans who feel the same.

In interviews, a number of Republican-leaning voters who supported neither major-party candidate last time echoed Mr. Spaulding’s view that they were comfortable with the relatively moderate Mr. Biden, for the very reasons that more progressive voters have been unenthusiastic about his candidacy.

“If you look at the entire field the Democratic Party put up, he was probably the most centrist of them all, and it’s that centrist side that leads me to be OK to vote for him,” said Emmanuel Wilder, who ran for the North Carolina Statehouse as a Republican in 2018.

Barbara Hill, an 85-year-old Arizona Republican who didn’t like either Trump or Hillary Clinton in 2016 and vote for someone else.

“I voted for somebody else on the ballot,’’ she told Glueck. “I wasted my vote, in other words, but I couldn’t stand either one of them.”

Not going to happen this time, she says. She’s voting for Biden.