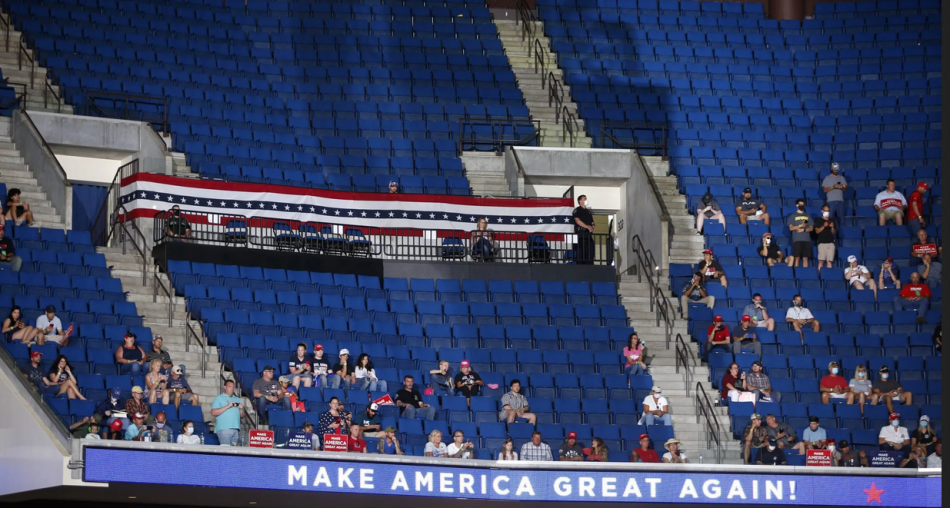 Two weeks after Donald Trump, America’s wannabe dictator president tried to jump start his floundering re-election campaign with a rally that broke most of the rules in place for fighting the coronavirus pandemic in Tulsa, OK, health officials say a spike in infections was mostly caused by the event.

“The past two days we’ve had almost 500 cases, and we know we had several large events a little over two weeks ago, which is about right,” said Tulsa Health Department Executive Director Bruce Dart during a news conference Wednesday. “So I guess we just connect the dots.”

More than new cases on Monday and Tuesday of this week, health experts agree, most likely claim from Trump’s rally that brought 6,200 people into an arena in Tulsa, where they avoided use of masks and did not maintain social distancing practices.

In addition, Secret Service agents and members of Trump’s staff came down with the virus, including the girlfriend of Trump’s son, Eric.

Trump, who claimed the virus posed little or no threat and ordered his staff to remove stickers in the arena that instructed visitors to maintain at least a six-foot distance, still ordered those who attended to sign a waiver to protect him, his campaign and the White House for lawsuits from anyone who got sick.

Dozens of Secret Service agents were ordered into self-quarantine after the rally, which was considered a flop because the arena’s crowd was less than half of what was expected and a second appearance outside the arena was scrapped after too few appeared.

The new infections come on another record day of new cases in the United States.

“Any state that is having a serious problem should seriously consider shutting down,” said Anthony Fauci, the top infectious disease expert in the United States.” His comments contradict Trump’s “let’s open everything up” and risk more infections and death stunts.

Trump’s moves bring strong reactions from members of Congress, where House leaders say having the federal government workforce return to their offices is a bad move.

“I think we have to press the pause button immediately,” said Rep. Gerald E. Connolly (D-Va.), chairman of the House Government Operations subcommittee, in an interview with the Washington Post. “There is no data that could make one comfortable that it is safe to return fully to work and to the status quo. In fact, all of the data suggest the opposite.”

New unemployment claims hit 1.3 million and Texas, a virus hot spot, saw its claim rise by more than 20,000 in a week.

That is a pattern economists have been dreading, and a departure from the “rocket ship” recovery that President Trump promised in June. Federal Reserve officials have warned publicly that recovery appears perilous and highly dependent on public health. “The path forward for the economy is extraordinarily uncertain and will depend in large part on our success in containing the virus,” Fed Chair Jerome H. Powell told a House committee on Tuesday. “A full recovery is unlikely until people are confident that it is safe to re-engage in a broad range of activities.”

The rocket ship that Trump bragged about has crashed.