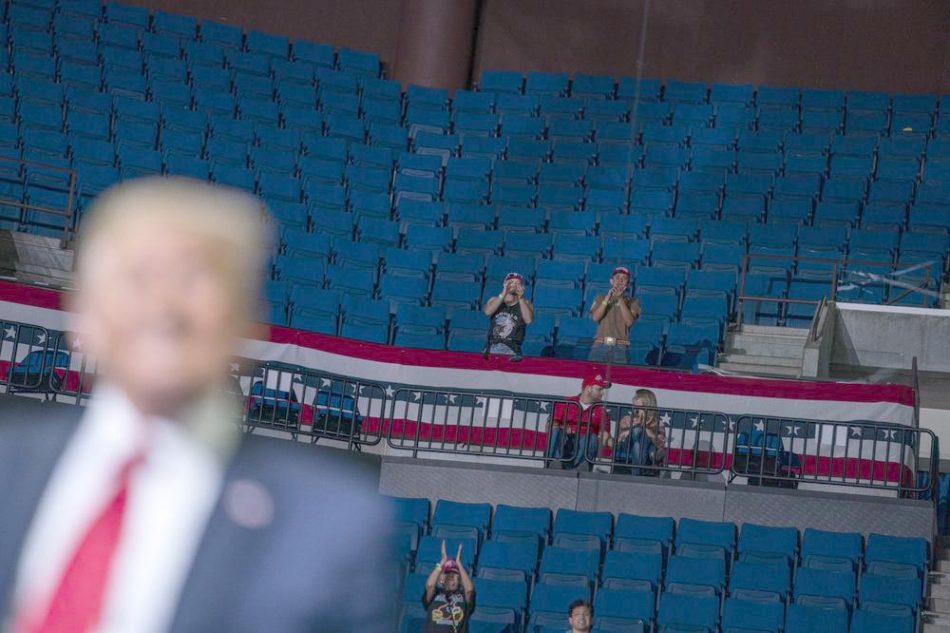 A third attempt to restart the faltering re-election campaign of Donald Trump failed again today when he canceled a planned appearance Saturday in New Hampshire.

The “official reason” was a threat from a tropical storm that is forecast to be past the area long before the rally’s starting time at 8 p.m. Saturday.

Campaign insiders say interest of area residents to come out to see the failing president in a hanger in Portsmouth was lagging far behind rallies of the past.

Strike three for the campaign that continues to sink into Trump’s toxic tank.

New Hampshire’s GOP governor, Chris Sununu, said he wasn’t planning to show up, at least two members of Congress said “no way” when asked to attend and Trump campaign officials feared that many other Republican elected officials would not appear.

While Trump keeps saying the virus is “under control” and “will disappear soon,” cases are surging around the nation and a recent Ipsos survey shows 76 percent of Americans are now concerned they could be infected by the escalating virus.

Trump campaign operatives admit privately that the crowd could be small enough to send Trump into what has become a constant depression over his decreasing likelihood to win re-election.

Trump’s outbursts to aides have become more frequent and those who come to see him report he lapses into rants about everyone is “out to get me.”

White House press secretary Kayleigh McEnany, traveling with Trump and reporters en route to Florida that the rally was “delayed’ because of “the big storm.” The campaign communications director blamed it on “Tropical Storm Fay.” The National Weather Service says rain from the storm should start tapering off by mid-morning Saturday and end by 2 p.m. — six hours before the rally was set to start.

“Good enough reason to cancel another rally that was going to come up short in expectations anyway,” said a campaign aide, who asked not be identified.