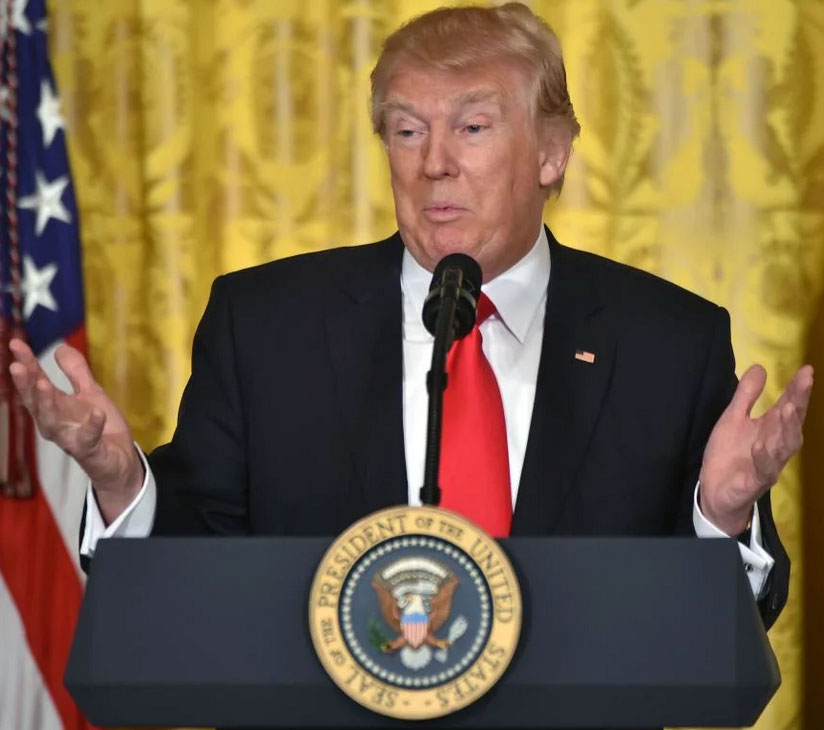 Trump: “Me? Lie? I’m president. I can do whatever I want.” (Nicholas Kamm/AFP/Getty Images)

Donald Trump, with more than 20,000 documented lies during his first three-a-half years in the Oval Office, keeps piling on.

Documented looks at his false claims and skewed rhetoric show a man who cannot tell the truth, even about simple things.

This week alone, America’s Liar-in-Chief lied about the citizenship of Democratic Vice Presidential candidate Kamala Harris, the tax plans of Presidential candidate Joe Biden, claims that Harris called Biden a racist, his attempts to decrease funding of Social Security, a claimed decrease in the Coronavirus threat, immunity of children to the virus, growth in a faltering economy that is failing because of his mishandling of the pandemic and more and more.’

Trump inherited a removing economy from President Barack Obama and drove it into the ground through his inactions, dishonesty and greed driven by a desire to enrich himself at the expense of the nation.

“President Trump is a straight shooter,” writes Max Boot in The Washington Post. “He consistently shoots himself in the foot.”

“In my lifetime I have never seen the American public and elected governmental figures tolerate the level of dishonesty that is being displayed right now in Washington,” declares Steve Wikert of Cedar Falls, Iowa, in The Times-Republican newspaper. “To all people who support dishonesty from our president, I say shame on you. The future of our nation is at stake. Alternative facts do not exist.”

“The American president’s incompetence, ignorance, and dishonesty in handling this crisis has been stunning,” writes Irwin Rediener in The Daily Beast. “His handling of COVID-19 is no misdemeanor — it’s a high crime.”

“One thing you have to say about Donald Trump: Three years into his presidency, no one believes a word he says. Not his Cabinet. Not Kellyanne Conway. Not the bartender at Mar-a-Lago.” says The Boston Herald.

In his book, “Commander-in-Cheat: How Golf Explains Trump,” Rick Reilley writes: “He cheats so blatantly on the golf course that his playing partners (usually celebrities or sports personalities) and trusty caddie, A.J., even the Secret Service agents, do not bother to look away. Trump’s logic: the guy up ahead is probably cheating so it’s OK if I do.”

He adds: “What does golf have to do with being president? Everything. To wit: If you cheat to win at golf, is it that much further to cheat to win an election?”

Every golfer knows the stain of cheating never goes away. Once done, it follows a player like bad body odour. Commander in Cheat makes a point to explain what smells about Trump and his character, both on the course and off.

Everything about Trump the golfer is a lie, from his handicap and the number of club championships he has won to the scores he posts (known as the “Trump Bump”) and the national ranking of the many golf courses he owns. Even his etiquette is bad. Trump routinely drives his golf cart (he never walks) right on the green, a golfing no-no.

In the White House press room Thursday, reporter Shirish Date asked Trump: “Mr. President, after three and a half years do you regret at  all the lying you’ve done to the American people?”

Trump fired back: “All the what?”

“All the lying, all the dishonesty,” Date answered.

Trump’s response: “Who has done?”

“You have done,” Date said.

Trump moved to other questions and never answered. His dishonesty lit up social media while his supporters called his question a “frontal insult to the president.”

Insult? How can one insult a serial liar, a con man and a fraud?