Voters to Palin: Stay out of Presidential race 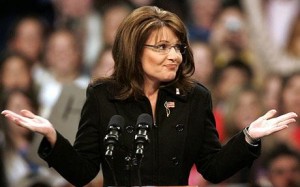 Votes to Sarah Palin: Don't call us, we'll call you

Sarah Palin may think she has what it takes to be President and political gurus may think she should run but a Fox News poll shows voters across the political spectrum have a common message for the former Alaska governor: Stay out of the race!

Even tea party members who earlier embraced Palin think she should stick to making money with books and speeches.

According to the polls, 74 percent of all respondents don’t think Palin should ever run for President and 71 percent of Republicans said “nada” to a presidential run by the fading political star.

Sixty-six percent of tea partiers said Palin shouldn’t run as did the same percentage of independents.

The widespread rejection of Palin as a Presidential contender spread across political, ideological and party lines. When asked for a reason on why Palin should not run, many said they found her “too extreme.”

Had the poll come from the New York Times, Washington Post or CBS the Palin faithful would be crying foul but this survey came from right-leaning Fox News, giving Sarah’s cult-like following little room to claim bias by the news organization behind the numbers.

Bottom line: It ain’t looking food for the Wasilla, Alaska’s claim to fame.