Obama to blacks: Stop whining and get to work 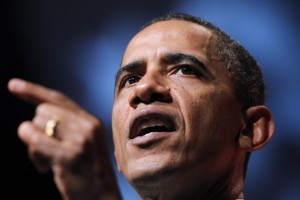 President Barack Obama, under fire from African-Americans for what they see as his inattention to their needs — fired back at the annual awards dinner of the Congressional Black Caucus Saturday night, telling blacks to stop whining and get to work helping him win a second term.

“Take off your bedroom slippers. Put on your marching shoes,” Obama told the audience. “Shake it off. Stop complainin’. Stop grumblin’ Stop cryin’. We are going to press on. We have work to do.”

The crowd cheered and applauded the President’s rallying cry.

Obama admitted times are tough — especially on the black community where unemployment is double the national average.

While Congressional black leaders continue to support the nation’s first African-American president, they are still vocal about what they see as his failure to step up and deal with their problems.

“If Bill Clinton had been in the White House and had failed to address this problem, we probably wold be marching on the White House, ” black caucus chairman Emanuel Cleaver of Missouri said in a recent interview.

Cleaver had harsh words for Obama’s debt-limit deal with Republicans, an agreement he called “a sugar-coated Satan sandwich.”