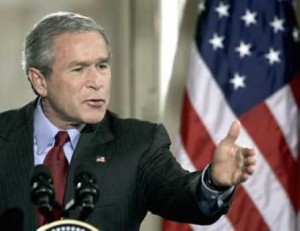 Nine out of 10 Americans think the nation’s economy is in the crapper and most of them still blame former President George W. Bush and the Republican Party.

That’s the finding of a CNN/ORC poll released Friday.  It’s the second time since 1997 that so many Americans have felt so much doom and gloom about the economy.

According to the poll, 52 percent of those surveyed say Bush and the Republican Party are responsible for the nation’s economic mess while 32 percent blame current President Barack Obama and Democrats.

But the poll does not bring joy to 1600 Pennsylvania Avenue, where staffers are pouring over a new Gallup Poll that shows 44 percent of Democrats are not all that excited about voting in 2012.

And while only four out every 10 Democrats show any enthusiasm for next year’s Presidential election, some 60 percent of Republicans say they are “more enthusiastic” about voting next year.

“Not a lot of smiles around here today,” one White House insider tells Capitol Hill Blue.

Just call it “Black Friday” at the White House.