Romney cruises to another debate win as Perry’s fade continues 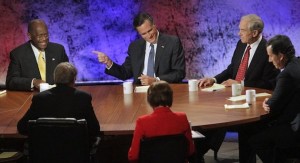 Romney, riding high going into the debate with a high-profile endorsement by New Jersey Gov. Chris Christie, cruised through the evening by looking far more Presidential than any of the other pretenders to the throne while avoiding any major gaffes or wounds from his challengers.

While others tried to land punches on Romney, the former Massachusetts governor avoided any direct hits and deflected attacks with ease.

The Bloomberg/Washington Post debate was clearly Romney’s night.  Rapidly-fading former frontrunner Rick Perry came into night needing a serious jump start to his campaign but appeared — as he has so much in the past — like a befuddled deer frozen in the headlight of an oncoming train.

Only Herman Cain, the former Godfather’s Pizza CEO, appears to remain as a challenger to Romney’s juggernaut.  Cain’s much-hyped “9-9-9” tax plan garnered a lot of attention — most of it critical — from the other candidates.  Cain has replaced Ron Paul as the darling of the straw polls — the votes for sale “beauty contests” that generate more media attention than actual proof of political strength.

Most called Cain’s tax plan more gimmick than substance.  Bachmann even compared it to Satan, suggesting “9-9-9” is really “666” — the “mark of the Beast” mentioned in the Book of Revelation — upside down.

“The devil’s in the details,” she said.

That’s assuming any voters can find the details amid all the hyperbole and hype of staged, media-event, debates.