Another day, another sexual harassment claim against Cain 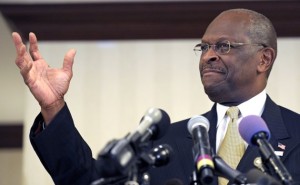 A sexual harassment tsunami is threatening to swamp the Herman Cain campaign ship as a third worker at the National Restaurant Association is claiming the GOP presidential contender displayed aggressive and inappropriate behavior towards her while Cain served as president of the trade association.

The employee contacted The Associated Press Wednesday with her story and follows Capitol Hill Blue’s disclosure Tuesday that Cain has a long and sordid history of sexually harassing female employees not only at the restaurant trade group but also at other companies he ran.

The new complaint comes from a woman who said she did not file a formal complaint because she knew of the charges filed by two other female employees and felt she did not need to file.  If the other complaints had not been filed she would have done so, the woman told the AP.

Cain, she said, invited her to join him for a drink at his corporate apartment after work.

The Cain campaign is denying the new charges and claiming the story was a plant by GOP rival Rick Perry.  Perry says it wasn’t him and suggested it might have been Mitt Romney’s campaign that planted the story.

Cain’s frequently shifting story about the sexual harassment charges have plunged his campaign in defense mode and is helping fuel a sex scandal that is growing daily.