‘Herman Cain reached for my genitals’ 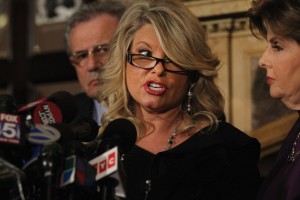 Sharon Bialek says Cain wanted sex in exchange for helping her find a new job after she was laid off from the association, groped her, reached for her crotch and tried to force her head into his crotch.

“I was surprised and shocked and I said, what are you doing? You know I have a boyfriend. This is not what I came here for,” Bialek told a press conference Monday.

Bialek said the unwanted advances came at dinner after she came to Washington from Chicago to ask Cain’s help in finding a new job.

The revelations are just the latest in a growing list of accusations of sexually-aggressive behavior by Cain towards women — not only at the restaurant association but throughout his business career.

Capitol Hill Blue has spoken to more than a dozen women who offer similar accounts of sexual harassment by Cain at NRA, Godfathers Pizza, Burger King and other employment venues.

“He’s a sexual predator,” says one woman, who asked not to be identified. “He’s a monster.”

Cain continues to maintain the allegations are part of a “smear campaign” engineered by his opponents for the GOP presidential nomination.

Bialek, however, says she is a registered Republican with no ax to grind. When she went ot Washington in 1007, Cain upgraded her hotel room to a suite without asking her fist and then began making advances at dinner.

“He suddenly reached over an dput his hand on my leg under my skirt and reached for my genitals,” she said. Then he tried to push her head towards his crotch, an obvious push for oral sex.

I was very very surprised and very shocked, I want you, Mr. Cain, to come clean. Just admit what you did. Admit you were inappropriate to people. I implore you. Make this right.

The Cain campaign Monday issued its standard denial, saying “All allegations of harassment against Mr. Cain are completely false. Mr. Cain has never harassed anyone.”