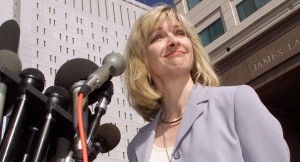 A second former employee of the National Restaurant Association went public today, confirming sexual harassment by GOP presidential contender Herman Cain when he served as head of the trade association in the 1990s.

Karen Kraushaar, now a spokeswoman for the Treasury Department, worked in the communications department and said she was a victim of Cain’s sexual harassment.

“When you are being sexually harassed in the workplace, your are extremely vulnerable,” Kraushaar said in an interview with The New York Times.  You do whatever you can to quickly get yourself into a job some place safe and that is what I thought I had achieved when I left.”

But her name leaked out this week and she says she will outline just what Cain did to her at the NRA.

Kraushaar’s revelations came as Cain denied ever sexually harassing anyone, even though mounting evidence suggests he has abused women in more workplaces than just the NRA.

Kraushaar joins Sharon Bialek, who worked for the association and said Cain groped her and tried to force her into oral sex in a car following dinner in Washington when she came to him for help in getting another job.

Cain, Bialek said, made it clear that he wanted sex in exchange for helping her find a new job.

No so, claims Cain.

“I have never acted inappropriately with anyone, period,” he claimed at a new conference in Arizona Tuesday.  “I will not be deterred by false, anonymous, incorrect accusations.”

With both Bailek and Kraushaar now going public, the charges are no longer anonymous and Kraushaar suggested she and others harassed by Cain may hold a joint press conference to expose the now scandal-plagued presidential candidate as a sexual predator.