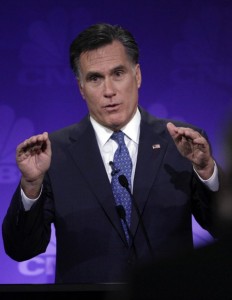 Former Massachusetts governor Mitt Romney delivered another strong debate performance Wednesday night but it was overshadowed by the continued flubs and problems by his fading rivals.

With Herman Cain increasingly on the defensive over past sexual harassment allegations and another “gotcha” moment by Rick Perry when he couldn’t remember one of his own campaign promises, Romney could have cruised.

But he hammered home his points with confidence and style and left his challengers in their own fog of controversy and mistakes.

The Texas governor’s memory lapse was pure political farce.  He stumbled, he mistakenly listed the Environmental Protection Agency (EPA), then he went back to not remembering.

Cain continued his staunch defiance in the face of mounting charges that he sexually harassed female employees with words, gropes and attempts to force oral sex.  The former Godfathers Pizza CEO whined that he is a victim tried in the court of “public opinion,” which is the court that determines the fate of all presidential candidates.

Cain also faltered on foreign policy and international debt crisis questions, which showcased his lack of debate preparation and lack of knowledge on the issues.

Meanwhile, Romney appeared cool, controlled and a man destined for the nomination.

Romney came across as the candidate destined to win.  The others  appeared to be mere pretenders.