Welcome back my friends to the show that never ends
We’re so glad you could attend
Come inside! Come inside!* 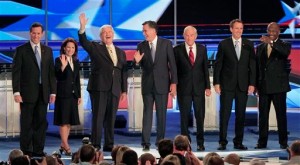 The GOP cast: The show must go on

From any rational point of view, the Republican party is in a mess as it stumbles towards naming a candidate to face Barack Obama in 2012.

In its manic scramble to find someone — anyone — to stave off former Massachusetts governor Mitt Romney‘s seemingly inevitable march to the nomination, the GOP is turning to an endless series of flawed, unqualified or inept pretenders to the throne.

With scandal-scarred, former speaker of the house Newt Gingrich joining the latest revolving door of perceived frontrunners, the center ring of this circus is complete.

Republicans now face the choice of looking the other way when it comes to the sexual predatory nature of former Godfather’s Pizza CEO Herman Cain, the mind-lapsing ineptness of Texas Gov. Rick Perry or the shoot-from-the-lip, take-the-money-and-run history of Gingrich.

To borrow an old line from former Harvard math professor and songwriter-satirist Tom Lehrer, Republicans have to feel like “a Christian Scientist With Appendicitis.”

The sad fact is that none of these pretenders can stand the spotlight of public scrutiny.

Rick Perry fell apart in the debates as his lack of knowledge, inability to remember even his own stump speech talking points and too many “deer in the headlight” moments revealed that this Texas stereotype is all hat and no cattle.

Herman Cain’s past as a powerful man who likes to use that power to sexually harass women isn’t his only problem.  His lack of knowledge on key issues came out in a newspaper editorial board interview and his lame attempts at crisis management showcases a man who clearly is not up to the job.

And Gingrich’s problematic history with the million dollar plus payments from Freddie Mac is just the tip of a political iceberg that could sink an entire fleet of ships.

This the best the GOP has to offer?  These guys are the star studs in the elephant herd?

Some pundits try to tell us that Jon Huntsman is the sleeper candidate but he’s mired at the bottom of every poll. Michele Bachmann has faded into the obscurity she so richly deserves.’

Which leaves us with Ron Paul, the twice-failed candidate for President (once as a Libertarian and once as a Republican), the favorite of a small — but hard core and highly vocal — cadre of supporters.

Some polls show Paul as a contender in the upcoming Iowa caucuses.  He might win, given the spoiler nature of Iowa’s strange caucus system, but a win in Iowa doesn’t translate into an easy path to the nomination.  New Hampshire has a habit of thinning the herd and Paul is barely a blip on the radar there.

Paul also has his share of baggage and a closet full of skeletons — including his past association with the ultra-right-wing John Birch Society and a slew of newsletters published under his name that included racist comments — although he denies writing the commentaries.  That and his history of off-the-wall comments and extreme positions scare the hell out of the mainstream GOP voters he needs to become a serious contender and are even more out-of-touch with independents who will determine who wins in 2012..

Paul will make a lot of noise early on but he won’t win the nomination. As in 2008, he won’t even come close.  He doesn’t have the organization and stuffing online polls or wining straw polls is not a path to collecting delegates for a nomination or wins in states where voters — not hand-picked caucus participants — have the final say.

Iowa is a sideshow that gets far more attention than it deserves.  The real race begins when the first voter steps into the first voting booth in the first actual primary of the season.

At this point, the odds favor Romney when that process starts.  In this volatile political climate those odds could change quickly but it will probably not be someone named Cain, Perry, Huntsman, Bachmann, Paul or Gingrich who turns those odds.

Each is a pretender to a throne that is still seeking a credible — and electable — leader.