Ron Paul surges in Iowa: Is it now his time? 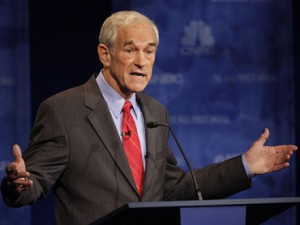 Texas Congressman Ron Paul is on the move in Iowa, passing former GOP frontrunner Mitt Romney for second in polls and even moving into a statistical tie with current leader Newt Gingrich in one.

“Paul is surging right now, there’s no doubt about that,” one GOP strategist tells Capitol Hill Blue. “He could be the dark horse that shocks both Romney and Gingrich.

New polls show support for Gingrich slipping slightly in Iowa with three weeks to go before the state caucuses that official open the Presidential primary season.

And while the former Speaker of the House leads in surveys, poll numbers don’t always translate into a win in the Iowa’s convoluted caucus system.

GOP political operatives agree that Paul has the best on-the-ground operation in Iowa and the ground game rules in the caucuses.

In addition, Paul — more than any other candidate in the crowded GOP field — is willing to go after Gingrich for his personal and political failures.

“I have to expose him for what he’s been doing over the years,” Paul is quoted as saying.

As a long-time member of the House, Paul was on Capitol Hill during Gingrich’s rise and fall from political power.  The Libertarian and family values Paul is clearly disgusted with Gingrich’s multiple affairs, three marriages and close ties to the Washington establishment.

Over in the Romney camp, strategists there secretly hope for a Paul win.  Losing in Iowa cold cripple Gingrich and open the door for Romney in New Hampshire and Iowa.

But what about Paul?  Some still doubt his long-term viability as a candidate.

Writes Chris Cillizza in The Fix for The Washington Post:

A Paul victory in Iowa would be a dream come true for Romney. Why? Because Paul, like former Arkansas governor Mike Huckabee in 2008, has far less obvious appeal in the states beyond Iowa and would likely struggle to build his caucus victory into a broader national campaign.

Paul’s enthusiastic supporters disagree.  They see a win in Iowa as the surge Paul needs to build momentum towards the nomination.

Impossible?  Not in an election year where the unlikely is the new normal.  This is the time when anything can — and probably will — happen.