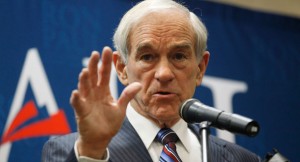 Texas Congressman and perennial Presidential contender Ron Paul changed his story again on his involvement with the controversial newsletters bearing his name published in the 1980s and 90s, telling a radio caller Thursday that, yes, he did write a “certain portion” of the material.

After claiming he “didn’t write them” and “didn’t see them” before walking off a CNN interview a week ago, Paul took another turn in his history of changing stories and told a caller on WHO-AM radio in Iowa:

Well, the newsletters were written, you know, a long time ago. And I wrote a certain portion of them. I would write the economics. So a lot of what you just mentioned… this would be material that I would turn in, and it would become part of the letter. But there were many times when I didn’t edit the whole letter, and things got put in. And I didn’t even really become aware of the details of that until many years later when somebody else called and said, you know what was in it? But these were sentences that were put in, a total of eight or ten sentences, and it was bad stuff. It wasn’t a reflection of my views at all. So it got in the letter, I thought it was terrible, it was tragic, you know and I had some responsibility for it, because my name went on the letter. But I was not an editor. I’m like a publisher.

Let’s take a closer look at Paul’s non-denial denial.  A week ago, he acted like he had absolutely nothing to do with the newsletters even though he defended the comments back in 1996 when questioned by the Dallas Morning News .  He claimed in 1996 that the racist, homophobic and anti-Semitic remarks were “taken out of context.”

In the 2008 Presidential campaign, when Capitol Hill Blue questioned him about the newsletter, he claimed he had “little to do” with writing or producing them.  Last week, he said “I didn’t write them, I didn’t read them and I disavow them.” Was he talking about the entire content of newsletters or just the questionable parts?  He didn’t make a distinction last week.  It appeared he was trying to disassociate himself from the newsletters altogether.

Now, once again, he’s admitting he wrote “a certain portion” and that “I didn’t edit the whole letters,” which suggests he edited at least some of them. He also says he has “some responsibility” for what appeared under his name.

Some responsibility? This from a small-time on-again, off-again Texas Congressman who claims he didn’t know what was being published and distributed under his name for 20 years and who now wants us to think he can run a country?

On the radio show, Paul says it wasn’t until “many years later” that “somebody else called” and told him about the racist comment and other slurs in the newsletters.

That is a lie.  The “somebody else” who called was Catalina Camia of the Dallas Morning News Washington bureau.  She called him in 1996 about the content of the newsletters after questions were raised by Paul’s opponent in his race to return to Congress after a 10-year absence.  The opponent found some of the racist comments in a 1992 edition of the Ron Paul political report but a review of several years of the newsletters by Capitol Hill Blue found some of the comments raised as a campaign issue were also printed in editions less a year earlier.  At the time, Paul didn’t deny writing the words, he just said they were “taken out of context.”

Wrote Camia on May 22, 1996: “Dr. Paul denied suggestions that he was a racist and said he was not evoking stereotypes when he wrote the columns. He said they should be read and quoted in their entirety to avoid misrepresentation.”

Key words here.  Camia wrote “he wrote the columns.”  Did Paul call up the Dallas Morning News and claim she misquoted or misrepresented his comments about writing the columns?  He did not. Did he or his campaign then say he “didn’t write the columns?”  They did not.  Paul did not start claiming he didn’t write the stuff until five years later.

Paul also claimed in a radio interview in Dallas that his newsletters had nothing to do with his campaign to return to Congress in 1996.

Carmia found otherwise. She wrote on May 22, 1996: “A phone call to the newsletter’s toll-free number was answered by his campaign staff.”

Another lie by Paul.

Paul continued to publish the newsletters for another 10 years and a review of issues published since they became a campaign issue in 1996 shows far more than “eight or 10 sentences” that contain homophobia and antisemitism.

Paul claims he isn’t a racist and close friends say they’ve never heard him utter a racial slur but he has no qualms about benefiting from the company of racists or anti-Semites.  He bragged to Ed Crane, president of the CATO institute that his “best source for congressional campaign donations was the mailing list for the Spotlight,” a racist, anti-Semitic tabloid published by Willis Carto, who claims the Holocaust never happened.

James Kirchick, a fellow with the Foundation for Defense of Democracies and a contributing editor for New Republic, notes that Paul pals around with conspiracy theorists like Alex Jones and continues to hold extremist views that are far outside the mainstream.

Noting that the Republican Jewish Coalition did not invite Paul to its Republican Presidential candidates forum, Kirchick writes in the conservative Weekly Standard:

While Paul’s views on Israel certainly place him outside the American, never mind Republican, mainstream, there is an even more elementary reason the RJC was right to exclude him from its event. It is Paul’s lucrative and decades-long promotion of bigotry and conspiracy theories, for which he has yet to account fully, and his continuing espousal of extremist views, that should make him unwelcome at any respectable forum, not only those hosted by Jewish organizations.

No conspiracy theory was too outlandish for Paul’s endorsement. One newsletter reported on the heretofore unknown phenomenon of “Needlin’,” in which “gangs of black girls between the ages of 12 and 14” roamed the streets of New York and injected white women with possibly HIV-infected syringes. Another newsletter warned that “the AIDS patient” should not be allowed to eat in restaurants because “AIDS can be transmitted by saliva,” a strange claim for a physician to make.

Paul gave credence to the theory, later shown to have been the product of a Soviet disinformation effort, that AIDS had been created in a U.S. government laboratory at Fort Detrick, Maryland. Three months before far-right extremists killed 168 Americans in Oklahoma City, Paul’s newsletter praised the “1,500 local militias now training to defend liberty” as “one of the most encouraging developments in America.” And he offered specific advice to antigovernment militia members, such as, “Keep the group size down,” “Keep quiet and you’re harder to find,” “Leave no clues,” “Avoid the phone as much as possible,” and “Don’t fire unless fired upon, but if they mean to have a war, let it begin here.”

Paul has gone right on appearing regularly on the radio program of Alex Jones, the most popular conspiracy theorist in America (unless that distinction belongs to Paul himself). To understand Jones’s paranoid worldview, it helps to watch a recent documentary he produced, Endgame: Blueprint for Global Enslavement, which reveals the secret plot of George Pataki, David Rockefeller, and Queen Beatrix, among other luminaries, to exterminate humanity and transform themselves into “superhuman” computer hybrids able to “travel throughout the cosmos.” There is nothing Jones believes the American government isn’t capable of, from “[encouraging] homosexuality with chemicals so that people don’t have children” to blowing up the Space Shuttle Columbia, a “textbook psychological warfare operation.”

When questioned about the content of the newsletters again by Texas Monthly in 2001, Paul — for the first time — claimed the words weren’t his and tried to distance himself from some of the more inflammatory statements.

So Paul’s newest story is that he didn’t write or see “eight or 10 sentences” of the newsletter.

What about the many conspiracies touted in the newsletters, including warnings of a Jewish takeover of the United States, claims about AK-47 wielding IRS against breaking down doors and charges that the United States would force Americans to “turn in all their money” so it could be replaced with pink currency embedded with electronic tracking capabilities?

“The money is now pink you know,” Paul said in the Thursday radio interview.

Paul’s campaign claims Dondero is a disgruntled ex-employee who has an ax to grind because he was fired.

Capitol Hill Blue has interviewed a number of former Paul aides who back Dondero’s story but he is — so far — the only one willing to go public.

So who can we believe?  Good question but after examining Paul’s ever-changing story on the newsletters as well as his continued alliance with fanatical conspiracy theorists and statements that suggest homophobia and anti-Semitism it is becoming more and more obvious that one person we cannot believe or trust is Ron Paul himself.